“Drunkenness is not romantic; it’s a form of temporary insanity. And hangovers are the body’s way of asking, ‘What were you thinking?”
― Susan J Anderson

After an absolutely insane move where its stock rallied more than 75% on nothing really more than news of a stock split, shares of Tesla (TSLA) are in the middle of a hangover as the stock is on pace for its third straight daily decline of roughly 5%.  Shares of Apple (AAPL) also ran up during August, in part on its stock split announcement, but the rally wasn’t nearly as large and wasn’t solely based on the split announcement.  It too is experiencing a bit of a reality check in the last two days as well.

US futures have been somewhat weak this morning as large-cap tech stocks see some mean reversion.  Over in Europe, equities are trading higher following yesterday’s strong afternoon rally in the US.  Economic data in Europe, in the form of Services PMI indices for the month of August, came in weaker than expected with sizable pullbacks relative to July data.  Europe was reportedly in much better shape with respect to the COVID pandemic, but that hasn’t translated to better economic data.  At least not yet.

Be sure to check out today’s Morning Lineup for a rundown of the latest stock-specific news of note, market performance in the US and Europe, economic data out of Europe and Asia, trends related to the COVID-19 outbreak, and much more.

In last Friday’s Bespoke Report, we highlighted the recent underperformance of the semiconductors relative to the S&P 500 and how it was at a one-month low even as the S&P 500 hit record highs.  This week, we have started to see a reversal of that trend as semis have had two very strong days.  In the process, that mini-trend of lower highs that has been in place for the last few weeks has been broken.  While economic headlines in the form of weaker PMIs for the Services sector raise some concerns regarding the health of the recovery, semis are starting to show a healthier picture. 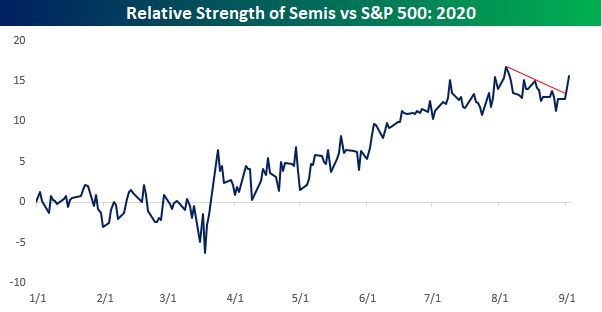