“There is only one side to the stock market; and it is not the bull side or the bear side, but the right side.” – Jesse Livermore

There’s nothing like ending one week with a gain of 1.6% and starting the next with another 1.6% rally.  Even after the 3%+ gain over the last two days, though, the S&P 500 still was not able to close above its 50-DMA yesterday.  It traded above there for part of the day on Monday but finished the day just shy, closing two points below its 50-DMA.  Futures have been trading on either side of the flat line this morning, as investors digest the gains of the last two trading days ahead of tonight’s debate between President Trump and former Vice President Biden.

Be sure to check out today’s Morning Lineup for a rundown of the latest stock-specific news of note, market performance in the US and Europe, economic activity in the manufacturing and services sectors, trends related to the COVID-19 outbreak, and much more.

Like the old adage to “sell in May and go away,”  there’s another less well-known axiom that says to ‘sell Rosh Hashanah and buy Yom Kippur’.  While there’s not much in the way of a good explanation behind the saying, with Yom Kippur ending Monday night at sundown, we wanted to provide a quick look at how the strategy has performed this year and in the past.  Even with this September being as weak as it has been already, we were a bit surprised to see that the S&P 500 was positive during the Rosh Hashanah to Yom Kippur period this year.  With a gain of less than 1%, though, Monday’s rally basically accounts for the entire positive move. 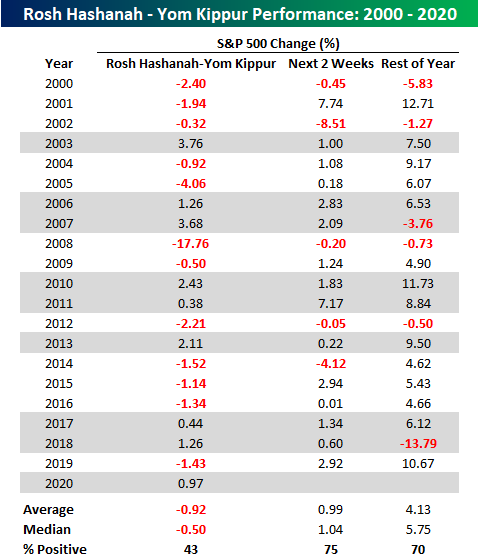