“For September so far this year the spending by $BAC customers both on debit and credit cards is up–spending overall is up.” – Brian Moynihan, CEO Bank of America

Futures have been modestly lower for most of the morning, but we have a busy day of Fed speakers on the schedule, and jobless claims were just released.  Both reports came in higher than expected.  Initial claims came in at 870K versus expectations of 840K while continuing claims were more than 300K above consensus forecasts (12.58 million versus 12.275 million). The only other economic data on the calendar is New Home Sales at 10 AM (estimate – 890K) and KC Fed Manufacturing (estimate – 14).

While the labor market appears to be slowing, or even weakening a bit, it was somewhat encouraging to hear Bank of America CEO Brian Moynihan say in an interview on CNBC this morning that both spending and checking account balances in its customer accounts is higher this September than it was last September.

Be sure to check out today’s Morning Lineup for a rundown of the latest stock-specific news of note, market performance in the US and Europe, economic data in Europe, trends related to the COVID-19 outbreak, and much more.

Yesterday was a lousy day for bulls capping off what has been a lousy month.  It could be worse. It has now been three weeks (14 trading days) since the S&P 500’s high on September 2nd, and during that span, the index has declined nearly 9.6%, which is just shy of the technical definition of a correction.

Now, rewind six months.  Half a year ago this morning, we were all coming in to our desks (or more accurately, at our kitchen counters, a corner of the bedroom, or maybe down at a table in the basement) and looking at a market that had just lost more than a quarter of its value in the same span (14 trading days).  By just about all accounts, things were looking bleak.  In the six months that followed, though, the S&P 500 has rallied more than 40% in what, even after the declines of the last three weeks, has been one of the strongest six-month rallies in the history of the stock market.

In a B.I.G. Tips report yesterday, we looked at prior periods where the S&P 500 saw similar moves over a six-month stretch to see how the S&P 500 performed going forward.  If you haven’t already, make sure to read it over. 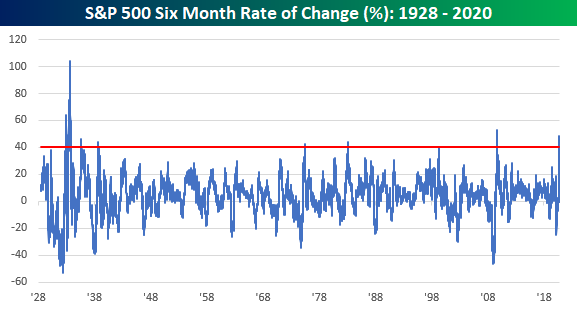