Down and down she goes, where she stops, nobody knows.  Global equities are tanking this morning as interest rates surge at what, in some cases are unprecedented rates. In Europe’s STOXX 600, just 19 stocks are currently higher on the day, and the UK government’s 5-year gilt has seen its yield surge by nearly 100 bps this week alone.  Over at least the last 30+ years, there has never been that large of an increase in the 5-year gilt yield in such a short period of time.  Fixed-income markets around the world are caught in an upward spiral of yields that most of the traders trying to navigate them have never seen.  Alongside the surge in rates, stocks are flushing, and while the magnitude of the decline is not as severe as the move in fixed-income markets, good luck convincing anyone to step up and buy on a Friday against a backdrop where the Federal Reserve is getting exactly what it wants. If today’s declines hold at 1% for the S&P 500, it will be the twelfth 1% to close out a week this year which would already rank as the sixth most since at least 1952 and there are still another 14 weeks left in the year.

With the 2-year yield surging another 7 basis points (bps) on Thursday and another 13 bps this morning, it is trading more than 2.5 standard deviations above its 50-day moving average (DMA).  Since 1976, there have only been 288 other trading days where the 2-year yield finished the day more than 2.5 standard deviations above its 50-DMA, and six of those occurrences have been in the last nine trading days!

The 2-year yield is also on pace to finish the day at ‘overbought’ levels (more than 1 standard deviation above its 50-DMA) for 24 straight trading days.  As shown in the chart below, though, overbought closes for the 2-year yield have been a regular occurrence lately, and there have been two other streaks this year that have lasted considerably longer.  Maybe a better question is how often this year has the two-year yield not finished a trading day at overbought levels? 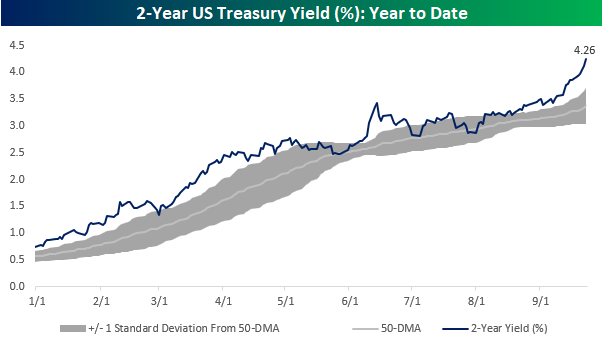 The answer to that question is less than 25%.  Of the 182 trading days this year, there have only been 41 where the two-year yield closed the day less than one standard deviation above its 50-DMA.  Flipping that around, the yield has finished the day at overbought levels 77.6% of the time.  Going back to 1977, there has never been another year where there was a higher percentage of days that the two-year yield finished the day at overbought levels.  The only two years that were even close were 1978 (72.7%) and 1994 (71.6%). There’s still a quarter of the year left, so this percentage could decline, but at the current pace, the pace of relentless increase in the two-year yield has been unprecedented. 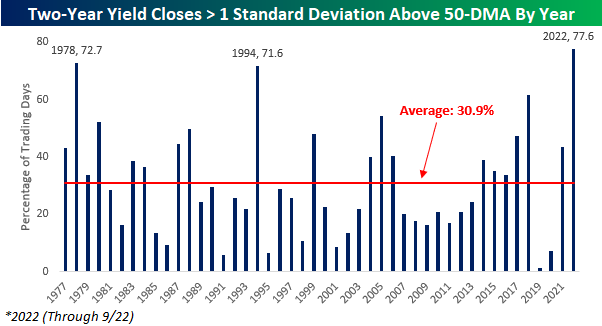