“No one knows whether this process will lead to a recession.” – Jerome Powell

Futures are modestly higher following a slew of central bank rate hikes around the world and a currency intervention from the BoJ.  Jobless Claims were just released for the latest week and came in at 213K which was 4K below consensus forecasts.  Continuing claims were likewise lower than forecasts coming in at a level of 1.379 million versus forecasts for a level of 1.418 million.  While yesterday’s close at the lows was disheartening for the bulls, when you consider how the market has performed following positive initial reactions to the Fed this year, maybe the Fed day weakness wasn’t so bad.

Years before he became Chairman of the Federal Reserve, Jerome Powell received an undergraduate degree from Princeton, a law degree from Georgetown, was a partner at the Carlye Group, and even served as under-secretary of the Treasury for domestic finance.  He’s not only extremely intelligent, but unlike many of his colleagues on the FOMC, he has real-world experience of how the private sector and financial markets work.

Given his experience, we’re sure Powell is familiar with the yield curve and how its shape impacts the economy.  Specifically, when the curve inverts and short-term interest rates rise above long-term rates, it tends to slow down economic activity.  While at the Carlyle Group and the private equity firm that he started after (Severn Capital Partners), he probably experienced these slowdowns firsthand and was able to make investments on good terms for his clients.

The Federal Reserve’s preferred measure of the yield curve is the spread between 3-month and 10-year US Treasuries, which still has a modestly positive slope at about 25 basis points (bps).  Besides that, another widely followed point on the curve is the spread between the 2-year and 10-year US Treasuries (2s10s). As of yesterday’s close, the 2s10s curve inverted to the tune of 52 bps making it the most inverted it has been since 1982!  It was nearly as inverted in April 2000, but back then the maximum point of inversion was 51 bps. Think about that for a minute.  A lot of people – maybe up to half- reading this right now weren’t even alive the last time the 2s10s curve was as inverted as it is now!  Looking at the chart below, since the mid-1970s, there has never been a period when the 2s10s yield curve was as inverted as it is now that a recession wasn’t just over the horizon. 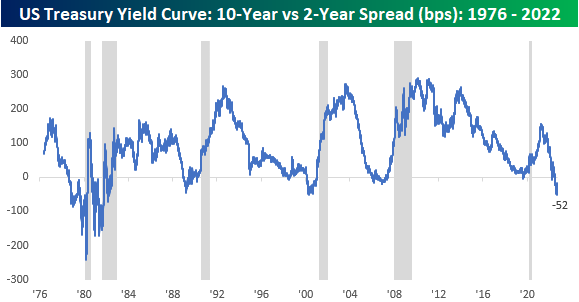 Getting back to Chair Powell, at one point in his press conference yesterday, he responded to one question with the answer that “No one knows whether this process will lead to a recession.”  Let’s get this straight. The yield curve is extremely inverted, GDP growth in the first two quarters of this year has already been negative, and forecasts for growth in Q3 have been steadily declining as we close out the month.  All this is before the recent unprecedented round of 75 bps rate hikes have had the opportunity to filter through the economy, and yet the Fed Chair is unsure of whether the US economy is either already in or on pace for a recession.  Now we know that it’s not a good look for a Fed Chair to forecast a recession as the base case scenario, but does he really believe what he’s saying?