“The worst of COVID may be behind us, but the economic challenges we face are no less daunting.” – Jane Fraser

Despite some bellicose comments from Putin overnight regarding the war in Ukraine, futures are higher this morning as US Treasury yields are modestly lower and oil prices trade moderately higher.  There’s also been some positive earnings news as General Mills (GIS) reported better than expected EPS and raised guidance, while Coty (COTY), a smaller company, raised Q1 guidance and sees full-year estimates inline with forecasts.  You can read all you want into these early moves, but it’s likely to all be irrelevant by the end of the day after the FOMC rate decisions and Powell’s press conference.

The comments above come from the prepared remarks of Citibank CEO Jane Fraser in testimony to Congress today.  Mid-term elections are just over a month away, so our elected representatives need some campaign soundbites.  What better way to do that than bring a bunch of bank CEOs to DC in person and give them a good scolding?  Anyways, the prepared remarks of Citibank CEO Jane Fraser and JP Morgan Chase CEO Jamie Dimon, who will say that “many Americans are being crushed by high inflation eroding real incomes, particularly from higher prices on gas and food,” don’t paint a very positive picture for the economy. Whatever happened to the roaring 20s we were supposed to have after COVID?

On the same day that bank CEOs present these dour economic forecasts, the FOMC will announce what is expected to be an increase of at least 75 basis points (bps) in the Fed Funds rate which would be the third straight increase of at least that magnitude.  Not only that but Powell is widely expected to set the stage for more rate hikes to come.  How much more in rate hikes that follow today’s meeting may depend on what the stock market does.  In an article earlier this week, Nick Timiraos at the Wall Street Journal reported that Fed officials were unhappy with the market’s positive reaction following the July rate hike of 75 bps. Powell’s displeasure with the market rally was so intense that he scrapped his prepared Jackson Hole speech in favor of a more direct and forceful message that the FOMC would “Keep At It” and do everything it could to bring inflation down.

Powell got exactly what he wanted from the market following that speech as stocks have been cratering ever since.  Minneapolis Fed President Neel Kashkari reinforced the Fed’s intent to get stock prices lower when he remarked that “I was actually happy to see how Chair Powell’s Jackson Hole speech was received…I certainly was not excited to see the stock market rallying after our latest Federal Open Market Committee meeting”.

Investors always discuss the Fed’s dual mandate of maximum employment and stable prices, and lately they have questioned whether the Fed has shifted to focus on a single mandate of stable prices.  With Powell taking the unusual step of completely ditching his Jackson Hole speech last month and then Kashkari outright endorsing the negative market reaction to Powell’s speech, the idea of a single mandate Fed – one intent on lower stock prices – now seems accurate.  Now, if only we knew how much of a bear market would satisfy the Fed’s new mandate.

When you have members of the Federal Reserve openly rooting for lower stock prices, you can’t be surprised by the performance of equities this year, but when you put it in a historical perspective, 2022 ranks right up there with the worst of them.  Yesterday, the S&P 500 fell more than 1% for the 45th time this year.  That works out to 25% of all trading days, or more than one 1% decline a week.  Since the five-trading day week started in 1952, the only other years with a higher percentage of 1% down days were 1974, 2002, and 2008.  With declines of 29.7%, 23.3%, and 38.5%, respectively in those years, this year’s decline of 19.10% seems pedestrian. 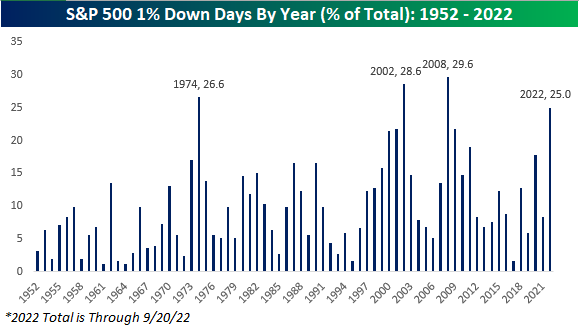