“The sea is dangerous and its storms terrible, but these obstacles have never been sufficient reason to remain ashore.” – Ferdinand Magellan

Just like yesterday, futures are lower this morning as interest rates continue to make new multi-year highs while crude oil is marginally higher.  The major news event of the overnight session was a 100 basis point rate hike from Sweden’s Riksbank.  That was the largest rate hike for the central bank since 1992.  In economic news, Germany’s headline PPI increased 7.9% month over month. Yes, you read that right- month over month.  In the US, Building Permits and Housing Starts came in mixed relative to expectations. Housing Starts were expected to come in roughly unchanged at 1.45 million, but the actual reading came in at 1.575 million.  Building Permits, however, missed expectations by just about as much as starts beat (1.517 million vs 1.610 million consensus forecast).

As has been the case for most of the year, interest rates are on the rise again this morning. The 2-year and 10-year US Treasury yields are up about 4 basis points (bps) pushing both up to new multi-year highs.  What’s somewhat notable about the moves in the last 24 hours is that for the first time in just over three months, both the 2 and 10-year yields are at 52-week highs.

In the case of the 2-year yield, its yield has been hitting 52-week highs pretty much every day since Labor Day, but the 10-year yield only took out its June highs yesterday.  No matter how many times we say it, it’s hard to imagine that less than nine months ago, ten-year yields were at 1.5% while two-year yields were less than 0.75%. 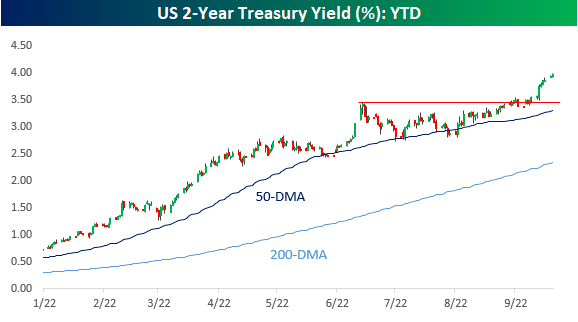 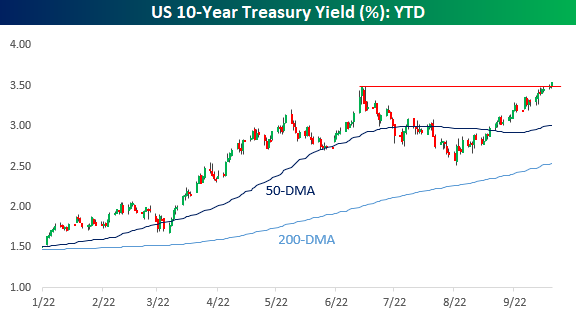