“I’m just opposed to a pure inflation-only mandate in which the only thing a central bank cares about is inflation and not employment.” – Janet Yellen

It’s understandable that the Friday before Labor Day is quiet as people look to get the most out of the last unofficial summer weekend, but the ‘flatness’ in futures is pretty remarkable given the volatility this week.  The fact that it’s an employment report Friday makes the tranquility even more notable.  Tune in at 4 PM to see if it lasts the entire day.  Heading into this Friday’s report, the Non-Farm Payrolls report has been stronger than expected for four straight months, and the only other time in the last 25 years that it had a longer streak of beating expectations was in September 2020 when the August report topped estimates for a fifth straight month.

Outside of equities, energy is mixed with crude oil trading about 2% higher while nat gas is down over 3% and below $9/mmbtu.  Treasury yields are modestly lower, but the 10-year yield is still at 3.25%.

The equity market had a pretty impressive reversal yesterday helping the S&P 500 to avoid a five-day losing streak following Fed Chair Powell’s hawkish speech in Jackson Hole last Friday.  The rebound wasn’t enough to push the Nasdaq into positive territory for the day, although it did finish well off the intraday lows.  Semis also managed to bounce, but the Philadelphia Semiconductor Index (SOX) still finished down over 1% on the day.  Not only was it the 5th straight day of losses for the SOX, but it was also the 5th straight decline of 1% or more, a streak in which it has dropped more than 11%.

The current losing streak for the SOX ranks as the longest run of 1%+ daily declines since January 2016 and just the 12th such streak in the index’s history.  Of those prior eleven, just three went on to last a sixth day and none extended to seven.  Just as we noted in a post yesterday how the magnitude of the decline in reaction to Powell’s Jackson Hole speech ranked on the extreme side relative to history, losing streaks like the one the SOX is in (or hopefully on the tail end of) right now have been uncommon over time. 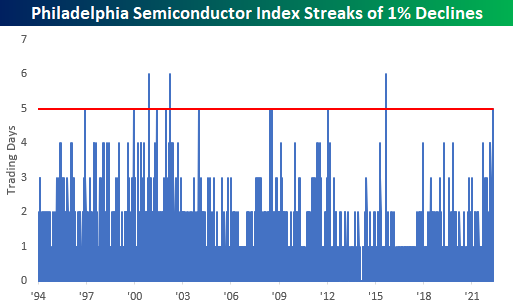