“It’s not like the CIA. We don’t have private, secret data on the economy.” – Jerome Powell

We’ve seen a fair amount of weaker than expected economic data over the last several weeks, and today will be a test for the strength of the recovery as a number of key reports are on the calendar.  Retail Sales, Jobless Claims, and the Philly Fed will all be released at 8:30, while Business Inventories will hit the tape at 10 AM.

Yesterday was a nice relief from the recent selling, but it has been surprising to see just how quickly investors have reversed course in terms of sentiment.  According to the weekly sentiment survey from AAII, bullish sentiment plunged from 38.9% down to 22.4% this week (lowest level since June 2020) while bearish sentiment surged from 27.2% up to 39.3% (highest level since last October). That was quick!

This morning, there’s been little movement in different asset classes as equity futures are just slightly lower, the 10-year yield is modestly higher, and oil is lower. Even in the crypto space, there’s little life as bitcoin is trading down just … 77 cents!

When it comes to seasonal patterns in the market, one less widely known trend is related to the Jewish calendar regarding Rosh Hashanah (the Jewish New Year) and Yom Kippur (Judaism’s most solemn day of the year). The old saying says to “Sell Rosh Hashanah and buy Yom Kippur” as the period between these days tends to be a weak time of year for the market. We’ll leave it to others to try and explain the reasons behind the axiom, but the actual results don’t refute the pattern.

The table below shows the performance of the S&P 500 from the close before the start of Rosh Hashanah to the closing price on the day Yom Kippur ends from 2000 through 2020 (2021’s performance is through Wednesday’s close). During that span, the S&P 500’s median performance during this period has been a decline of 0.50% (average: -0.92%) with positive returns less than half of the time.

While equity market returns have been weak during the period between these two days on the Jewish calendar, Yom Kippur ends tonight at sundown, so what are market trends from after Yom Kippur ends through year-end?  Overall, the broad market trend has been positive.  In the twenty-one prior years shown, the S&P 500’s median rest of year performance has been a gain of 6.07% with gains 71% of the time. In the table, we have also shaded those years where the S&P 500 bucked the market headwinds and posted positive returns during this period, but it tended to have no impact on performance for the remainder of the year.

While we have seen all sorts of theories over the years as to why the equity market has been weak in the period between Rosh Hashanah and Yom Kippur, it is also important to remember that both of these days occur at a time of year that is already seasonally weak to begin with. 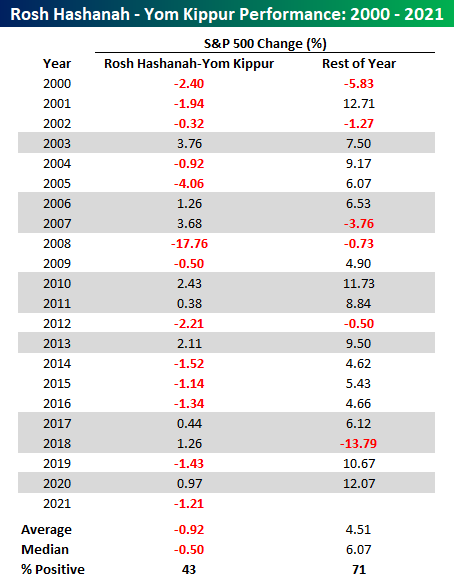