“The key to risk management is never putting yourself in a position where you cannot live to fight another day.” – Dick Fuld

To some, September 15th means that summer ends in a week, but others remember September 15th as the day Lehman died.  Regardless of what comes to your mind first, it’s a lousy day.  Equity futures are lower, treasury yields are higher, and crude oil is lower heading into what is going to be a busy day for data.  Things kicked off at 8:30 with jobless claims, retail sales, import prices, Empire Manufacturing, and the Philly Fed.  Jobless Claims were better than expected as were Retail Sales.  Import Prices were less weak than expected, and finally, both the Empire and Philly Fed reports were negative, although the Empire was slightly better than expected while the Philly report was weaker.  Perhaps most notable was that in both regional Fed reports, the Prices Paid components were at the lowest levels since December 2020.  At 9:15, we’ll get updates on Industrial Production and Capacity Utilization, and then finally at 10:00 we’ll finish the day of data with Business Inventories.

Asian markets were mixed overnight while Europe is mostly higher.  Japan’s Finance Minister warned markets that any intervention in the currency markets would be ‘swift’ and not announced in advance. In Europe, an ECB policymaker said he sees price pressures spreading out in the economy and warned that the central bank might be forced to raise rates more than expected.

September has historically been a lousy month for stocks, and the second half of the month has been notoriously weak.  Over the last 40 years, the S&P 500’s median performance has been a decline of 0.49% with positive returns just 40% of the time.  Making matters even worse, the years where the S&P 500 was down in the second half of the month saw a much larger magnitude of decline (-1.92%) than the years when it was up (1.07%).  The last ten years have been even more painful.  From 2012 to 2021, the second half of September has only been up three times and the median decline has been 0.81%. 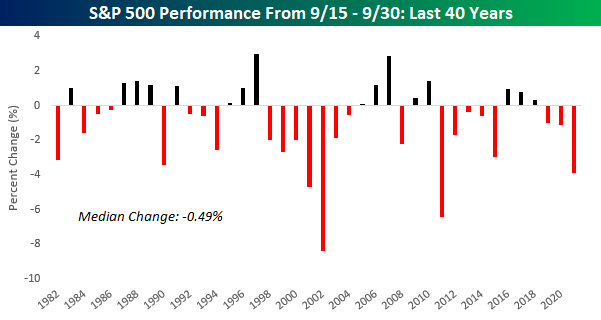