“Teachers Open The Doors, But You Must Enter By Yourself.” – Chinese Proverb

The only things many teachers are opening this school year are Zoom sessions as a number of physical schools around the country remain closed.  In these situations, there is an even added responsibility for students to take the initiative to ‘enter’ the learning process. If nothing else, it promises to be a major social experiment in the country’s education process as well as in the lives of parents who can’t return to work because their children remain stuck at home.

Equities are in a decent mood to kick off the week as futures are higher on deal news in the tech and health care space.  Over in Europe, major benchmarks are on either side of the flatline this morning as ECB officials say they are at the ready to use all means available to increase inflation which in their estimation remains stubbornly low.  In Germany, economic forecasters also noted that they don’t expect to see growth return to pre-crisis levels until 2022.

Be sure to check out today’s Morning Lineup for a rundown of the latest stock-specific news of note, market performance in the US and Europe, industrial production in Europe, trends related to the COVID-19 outbreak, and much more.

After a strong first two days to start off the month, September has been pretty much of a straight line lower as the S&P 500 is down over 4% month to date.  Weakness in September shouldn’t come as a surprise given the month’s historical record as the worst of the year.  What is a bit surprising, though, is that the weakness has come in the first half of the month. 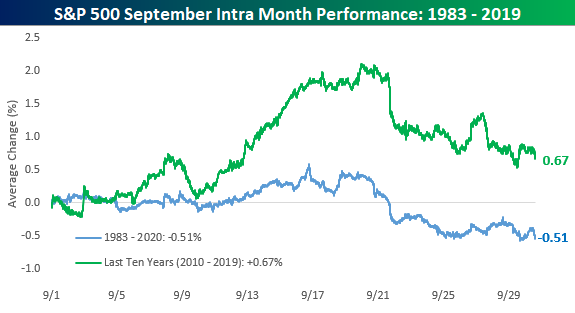