“See things in the present, even if they are in the future. ” – Larry Ellison

It looked earlier like futures were going to pick right up where they left off last week, but the positive tone in the pre-market has been weakening ahead of the opening bell. There wasn’t much to drive the positive tone earlier, and there has been no apparent catalyst for the weakness in the last half hour.  It’s a quiet day for data today as there are no economic reports on the calendar, and the only earnings report of note is Oracle (ORCL) after the close.  The big report of the week comes tomorrow, though, when August CPI will be released at 8:30 AM.  Economists are currently forecasting the headline reading to show a decline of 0.1%, although, given the trajectory of gas prices and other secondary indicators, so-called whisper numbers are even more negative.

The holiday-shortened week started off poorly last week but finished on a strong note with three straight gains including two days where the S&P 500 surged 1%+ on solid (+400) breadth.  The rally also helped to bring the S&P 500 back above its 50-DMA.  It’s been a roller-coaster summer for US stocks as the monster rally in the S&P 500 tracking ETF (SPY) off the June lows failed right at the 200-DMA and downtrend line from the January highs.  The sell-off was arrested last week right at the uptrend from the June lows, and with three weeks of trading left in the third quarter, the S&P 500 finds itself in a bit of no man’s land.

All eleven sectors have turned in positive returns over the last five trading days (which includes the Friday before Labor Day).  Materials and Consumer Discretionary have led the stampede with gains of just under 5% while Financials aren’t far behind rallying by 3.65%.  Consumer Staples is the only sector up less than 1% and one of just three sectors still below its 50-DMA.  The only two other sectors below that level are Communications Services and Technology.  They are also both the only sectors down over 20% YTD.  Given its size in the market, Technology is usually the sector that leads the ship, but it is nice to see that the broader market can rally even if that sector underperforms. 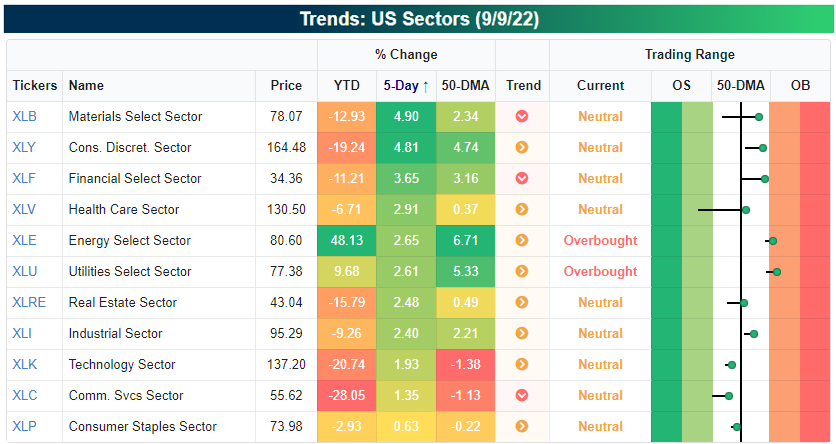