“The report continues to be that a plane hit the World Trade Center.” – Mark Haines, CNBC 9/11/01

While there’s now an increasing number of people who have no recollection of the 9/11 attacks, there’s still an even larger percentage of us who can’t believe it has already been 19 years.  We can all still remember exactly where we were and what we were doing at the time.

It was a crisp and sunny fall day, and futures were trading higher after what had been an inexplicably weak number of days where the market did nothing by trade lower with little in the way of any bounces.  On the morning of 9/11, stocks were looking up for a change.  Then, someone in the office turned the volume up on the TV as Mark Haines broke away from an interview to show the billowing smoke coming out of the North Tower.  In the minutes that followed, the details became clear, and the last thing that anyone cared about was what they were just doing or the plunging futures.

Futures are higher this morning too as the market attempts to recover from a much more explicable decline in the markets over the last week as growth stocks attempt to work off extremely overbought conditions.  The economic calendar is relatively quiet with CPI the only release on the calendar

Yesterday, we showed the intraday chart of the S&P 500 since the high on 9/2.  Today, we are updating it to show yesterday’s action as well.  After opening higher, the S&P 500 once again ran into resistance at last Friday’s closing level (as it also did on Wednesday afternoon) and then traded lower all day.  By the closing bell, Friday’s highs were a distant memory, and traders were breathing a sigh of relief that Tuesday’s lows held.

As things stand this morning, the S&P 500 will open right in the middle of yesterday’s range.  Given the moves we’ve seen of late, it’s highly likely that at some point in the day we will encounter yesterday’s high or low and maybe even both.  How the market reacts to either of these levels will then likely dictate the tone going into next week. 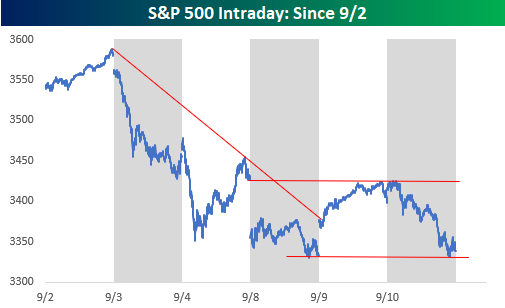