“No day shall erase you from the memory of time.” – Virgil

After four straight days of losses, the S&P 500 is indicated to end the week on a positive note.  That could change between now and the closing bell, but with the PPI report out of the way (mostly inline with expectations), there won’t be much on the data front to derail things.  The positive tone in futures this morning is primarily being attributed to news that President Biden and Chinese President Xi spoke on the phone last night for 90 minutes for the first time since February.

After closing at a record high last Thursday, the S&P 500 heads into the day today riding a four-day losing streak.  Despite the string of weak days, the magnitude of the decline has been pretty well contained with a cumulative decline of just under 1%.  To put this in perspective, in the entire post-WWII period, the current losing streak represents just the 16th time that the S&P 500 had a 4-day losing streak but was still within 1% of a record closing high.

The log chart below of the S&P 500, where every horizontal line represents a doubling of the index, shows every occurrence mentioned above (there were none prior to 1960).  Interestingly, these streaks were pretty much bunched into three different periods.  The first was in the 1960s, but from 1968 through 1990, there wasn’t a single occurrence. From 1991 through 1993, there were three occurrences, but then there was another gap of twenty years without a single occurrence!  Then, from December 2013 through the present, there have now been six separate streaks. 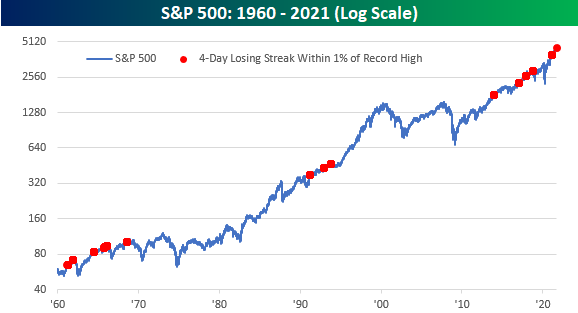