“Seek advice on risk from the wealthy who still take risks, not friends who dare nothing more than a football bet.” – J. Paul Getty

It’s that time of year again as the NFL is set to kick off its season this evening as it typically does every year on the first Thursday after Labor Day.  The season will go off as usual with a full season, playoffs, and the Super Bowl LV on February 7, 2021.  Why are we even talking about this?  Because after six months of abbreviated seasons and canceled events in the world of sports, the return to a normal season for a major league is a step in the right direction.  Some degree of normality in just a small part of their lives is what just about everyone could use right now.  The Chiefs even plan to allow fans to the stadium for tonight’s game against the Texans.  While ticket sales were capped at 16,000, for some teams these days, that’s a perfectly normal crowd.

In economic data this morning, jobless claims were higher than expected on both an initial and continuing basis, while revisions to last week’s report were minimal.  On the inflation front, PPI came in slightly higher than expected. Futures were modestly lower on the S&P 500 and higher for the Nasdaq heading into the release and basically remained there after the report as well.

Where the market goes from here in the short-term is basically a coin-flip, and the S&P 500 intraday chart from the last week has something for both the bulls and bears.  On the bullish side, yesterday’s open broke what was starting to look like a downtrend from the high on 9/2.  As the market rallied throughout the day yesterday, though, it ran out of steam right at Friday’s close.  So until that level from Friday can be broken to the upside, the bears are on top. 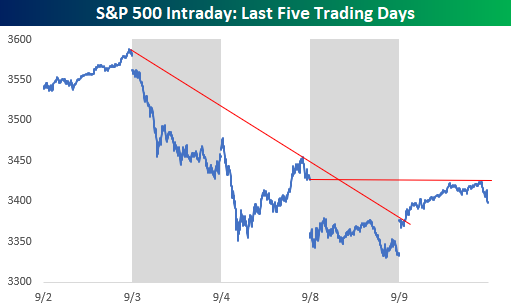