“Although it’s easy to forget sometimes, a share is not a lottery ticket… it’s part ownership of a business.” – Peter Lynch

With the stock split announcements from Apple (AAPL) and Tesla (TSLA) over the last month, we have been reminded by many market experts that stock splits don’t matter as they have no impact on company fundamentals.  That’s obviously true, but tell shareholders or short-sellers of AAPL and TSLA that stock splits don’t matter.  Since each company announced their respective stock splits since the end of July, they have seen their market caps increase by a combined roughly $700 billion!  AAPL is now bigger than the entire Russell 2000, and Tesla is just one General Motors (GM), or $30 billion, from having a larger market cap than Berkshire Hathaway.  AAPL’s market cap has been boosted by a blowout earnings report along with the stock split, but the $190 billion in market cap that TSLA has added has come on essentially no substantive news other than the split.

It’s a new month, but we’re seeing more of the same in markets this morning as the Nasdaq is set to open higher while the DJIA lags.  The dollar is lower, and commodities are higher. In economic news, PMI data around the world showed modest increases in August with the majority of countries showing manufacturing gauges in expansion territory.

Be sure to check out today’s Morning Lineup for a rundown of the latest stock-specific news of note, market performance in the US and Europe, economic data out of Europe and Asia, trends related to the COVID-19 outbreak, and much more.

In a month where just about everything went up, the US dollar was lower in August as it has now been for five straight months.  This current losing streak is the longest for the US Dollar Index since the six-month period ending in August 2017.  Before that only longer streak was a ten-month streak ending in May 2003.  Between those two streaks, there were three other five-month losing streaks.  In the history of the US Dollar Index, there have only been a total of nine streaks that were longer and eight streaks that were as long.  With the Dollar Index already down pretty sharply to kick off September, a six-month losing streak could certainly be in the cards.  Better buy those imported goods while you can still afford them! 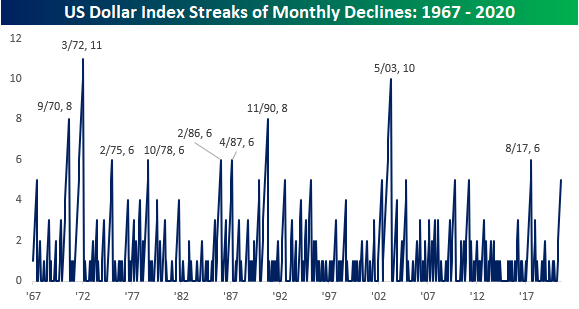