“Somebody needs to do something — it’s just incredibly pathetic that it has to be us.” – Jerry Garcia

Yesterday it was NVIDIA (NVDA), and today it’s Micron’s (MU) turn as the company lowered revenue guidance citing a challenging market in which customers were working down inventories.  Today’s revenue warning is the second in just over a month.  The last time MU lowered guidance on June 30th, it said sales for Q4 would come in at a range of $6.8 billion to $7.6 billion compared to analysts’ forecasts of $9.1 billion.  This morning, MU is saying that revenues will come in at or below the low end of its guidance from June 30th.  In other words, in the span of a month and ten days, MU has lowered sales forecasts by at least 25%!

Given the warning from MU, the negative tone in the futures market this morning has been most pronounced in the Nasdaq where futures are down more than half of one percent.  Along with the weakness in equity futures, bond yields are modestly higher and crude oil is up over 1%. In economic data, Small Business Sentiment came in modestly better than expected, rising slightly from last month’s level, while Non-Farm Productivity was roughly in line with expectations and Unit Labor Costs were higher than forecast.

Today’s Morning Lineup discusses earnings and market news out of Europe and the Americas, overnight economic data, yesterday’s raid on Mar-a-Lago, and much more.

As the S&P 500 looks to make a higher high and break its downtrend from its high over six months ago, the cumulative advance/decline (A/D) line has already crossed both milestones.  As shown in the chart below, in addition to breaking the downtrend from its high right around the turn of the year, the S&P 500’s cumulative A/D line also just recently made a higher high.  Even during Monday’s trading, while the S&P 500 traded fractionally lower, the A/D line was actually firmly in positive territory at more than +100. 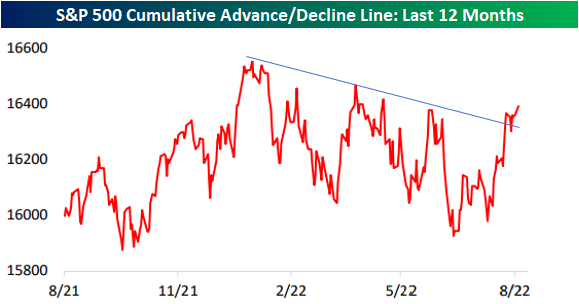