“Because only if you’ve been in the deepest valley can you ever know how magnificent it is to be on the highest mountain.” – Richard Nixon

People always need a scapegoat, and in the Summer of 1974 with the economy stuck in a deep recession and inflation surging, the buck stopped at Richard Nixon.  Mired in the Watergate scandal and with impeachment proceedings underway, Nixon announced his intention to resign from office the following day.  Nixon’s resignation didn’t staunch the bleeding, and over the following two months, the S&P 500 declined another 20% before finally bottoming in early October. By the following February, though, stocks were already back at pre-resignation levels, and they didn’t look back from there. While stocks bottomed, the rest of the 1970s wasn’t a particularly good period for the economy or markets though.  There are plenty of similarities between now and the early 1970s, but the differences are probably even greater, and the market backdrop isn’t nearly as bad now as it was 48 years ago today.

Today’s Morning Lineup discusses new trends in US industrial policy, earnings and market news out of Europe and the Americas, and much more.

The S&P 500 managed positive returns last week making it the third straight week of gains. That may not sound all that impressive at first, but when you consider that there were only three up weeks in the entire second quarter, it sounds like a much bigger deal.  Last week’s rally was on the small side as the S&P 500 rose less than 0.5%, but six sectors managed to post gains.

Leading the way higher were Technology and Communication Services, which each rallied more than 1%, followed by Consumer Discretionary which came up just shy of the 1% mark. On the downside, three sectors also declined more than 1%, but the big loser was Energy.  With a decline of 6.81% last week, XLE dropped below its 50-DMA and is the only sector heading into this week below that level.  Energy may be the biggest loser recently, but it still tops the leaderboard on a YTD basis by a wide margin (+34.31%) and is one of just two sectors, along with Utilities (+5.22%), that is in the black YTD. 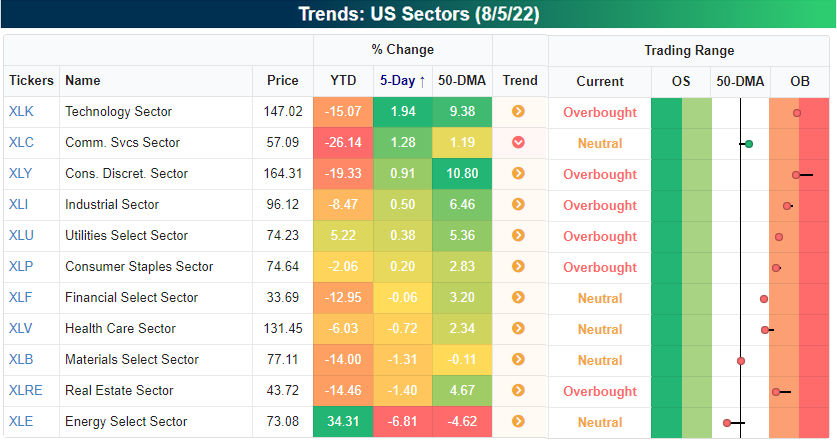