“When you invest, you are buying a day that you don’t have to work.” – Aya Laraya

It’s another jobs day.  Inflation has become the biggest issue facing the markets lately, so jobs reports aren’t quite as important as they once were, but today’s report will still have implications concerning FOMC policy.  Headline jobs came in much better than expected, the Unemployment Rate was lower than expected, average hourly earnings were better than expected, and average weekly hours came in higher than expected.  More jobs, longer hours, and more pay.  The immediate response in the market was for futures to pull back sharply and interest rates to spike higher.

Today’s Morning Lineup discusses earnings and market news out of Europe and the Americas, the now likely to pass reconciliation bill in the Senate, and much more.

It may sound hard to believe given the year it has been for stocks, but this week the S&P 500 closed further above its 50-day moving average (DMA) than at any other point since April 2021!  The chart below shows the spread (in percentage terms) between the S&P 500’s price and the 50-day moving average over the last two years.  After spending a number of months below the 50-DMA, the S&P 500 crossed above it in late July and made a bee-line for the 5% threshold this week.  Between now and April 2021, there were two other periods where the spread approached 5%.  The first was in November 2021 when the S&P 500 came up just short of 5%, and then back in late March when the spread briefly topped 5%.  Back in the November period, the S&P 500 actually went on to make new highs even as the internals of the market were already deteriorating.  Back in late March, though, right when the spread topped 5%, the rally ran out of gas. 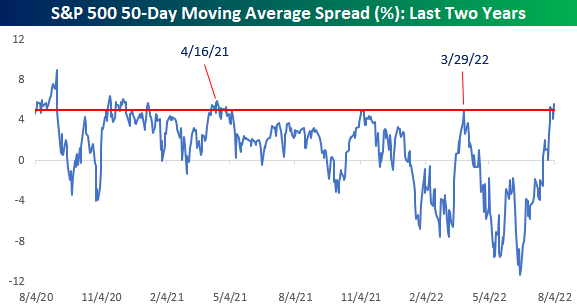