“Far and away the best prize that life offers is the chance to work hard at work worth doing.” – Theodore Roosevelt

Futures were higher earlier but have given up much of their gains as we head into the open.  Initial Jobless Claims were just released and came in at 260K which is just 1K shy of a post-COVID high.  Continuing Jobless Claims saw a larger increase hitting the highest levels since April.  In the UK, the BoE raised rates by 50 bps which was the largest hike since 1995.  What’s ironic about the move is that at the same time the central bank raised rates by the most in more than 25 years, it also warned of a long recession.

Today’s Morning Lineup discusses earnings and market news out of Europe and the Americas, rate hikes in Brazil and the UK, a look at LNG markets on news of a sooner-than-expected restart at the Freeport terminal, and much more.

Yesterday was the 58th time in 2022 that the Nasdaq experienced a one-day rally or decline of 2% or more, and it is only August 4th!  To put that in perspective, we’re just under 150 trading days into the year, so at the current pace, we’re seeing an average of about two 2%+ daily moves per week!  How does that stack up relative to history? Going back to 1971, even if there aren’t any more 2% moves for the rest of the year, 2022 would rank as the 6th highest number of 2% days in a calendar year in the Nasdaq’s history.  That’s just four less than the total for 1999, 25 behind the total for 2008, but well more than 40 below the triple-digit totals seen in 2000, 2001, and 2002.  The record for the greatest number of 2% days in a calendar year came in 2000 when the 2% threshold was crossed 134 times or more than once every other day. 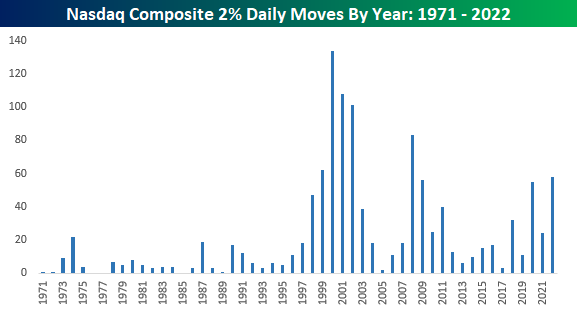 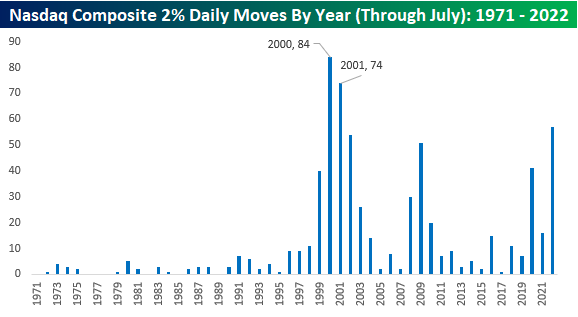