“A wise man will make more opportunities than he finds.” – Francis Bacon

Futures are currently trading pretty much where they were at this time 24 hours ago.  Yesterday, the bulls couldn’t hang on as a new multi-month low in the 10-year yield raised concerns that economic growth was weakening.  Rates are modestly higher this morning reversing a small portion of yesterday’s decline.  Over in Europe, the STOXX 600 is higher and that follows a relatively weak night over in Asia.  There’s not a lot of economic data to contend with today (Factory Orders at 10 AM), but the earnings stream which already picked up after the close yesterday will continue in full force today.  For the entire week, nearly 30% of companies in the S&P 500 are scheduled to report.  Try staying on top of all those reports!

Read today’s Morning Lineup for a recap of all the major market news and events from around the world, including a record drop in Spanish unemployment, the latest US and international COVID trends including our vaccination trackers, and much more.

One question we’re often asked is that with the Delta variant pushing COVID case counts higher, is the market being too complacent of the risks?  Rising case counts are an alarm, but looking at how the wave has progressed in other areas of the world provides a blueprint that the Delta wave may be severe in terms of transmissibility, but it hasn’t been long-lasting.  Additionally, the market is more concerned with consumer behavior and to this point, it appears as though Delta’s impact has not caused much in the way of a change in consumer behavior.

A case in point is airline passenger throughput from the TSA.  Yesterday was the fifth straight day since the pandemic began that US airports processed more than 2 million passengers per day.  The last time that happened was in mid-February 2020.  Included in that 5-day run was the first Saturday since last March that more than 2 million passengers traveled on a Saturday, leaving Tuesday and Wednesday as the only two days of the week that haven’t topped the 2 million level since the pandemic began. 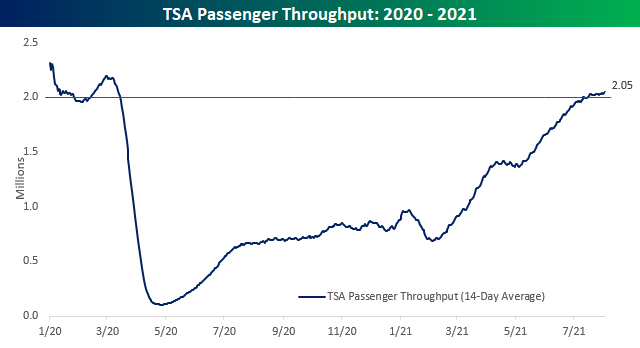