“Nothing great was ever achieved without enthusiasm  – Ralph Waldo Emerson

Futures are mixed heading into the second to last trading session of the week, and there has been little change even after initial claims and the revision to GDP.  Generally speaking, the reports came in close to expectations with little in the way of surprises.  For the rest of today, markets will be watching for commentary from Fed officials ahead of tomorrow’s Jackson Hole speech from Fed Chair Powell. This morning, KC Fed President Esther George, who is a non-voter, suggested that it’s time for the Fed to start removing stimulus, and right now St. Louis Fed President Jim Bullard (another non-voter this year) is striking the same tone, although he has had these views for some time now.  All week long, the market has been betting that Powell would take a dovish tone in tomorrow’s speech, but after the rally of the last five days, maybe that has become too priced in at this point.

After underperforming the market-cap-weighted index for months, the equal-weighted S&P 500 has recently started to get back on track and has been reaching new highs itself as well.  After bumping up against resistance multiple times in the spring and early summer, the equal-weighted index briefly broke out to new highs in late July and early August before pulling back last week on concerns over Afghanistan and a Fed taper.  The index pulled back to its 50-DMA, but like the market-cap-weighted index, it has bounced back nicely and finally hit a new high again in yesterday’s trading. 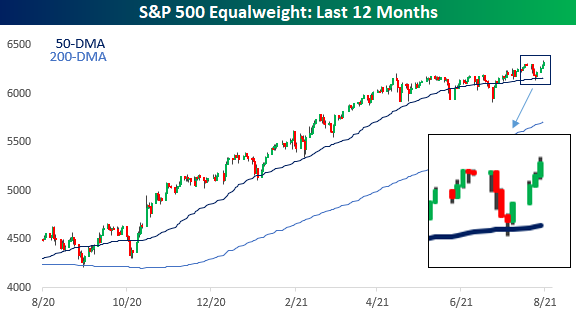