“It’s hard to live your life in color, and tell the truth in black and white.” – Gregg Allman

We’re still a full day from Powell’s Jackson Hole speech, but futures have shown some resilience this morning indicating a positive start to the trading day.  Interest rates are little changed but slightly biased to the upside.  It’s a busy day for economic data for jobless claims, GDP, Personal Consumption, and Core PCE all at 8:30 with the KC Fed Manufacturing report coming out at 11 AM.  The 8:30 data was just released and Jobless Claims came in lower than expected on both an initial and continuing basis.  The revision to Q2 GDP came in at a decline of 0.6% which was slightly less worse than forecasts for a decline of 0.7%.  Personal Consumption came in right in line with forecasts at 1.5% while Core PCE was 4.4% which was in line with consensus forecasts.  All in all not much in the way of big surprises.

As investors gnaw on their fingernails in anticipation of Friday’s Powell speech in Jackson Hole, they remain anxious about the direction of interest rates.  The yield on the 10-year US Treasury has gone from a multi-year high of just under 3.5% in late June down to 2.57% in early August.  Since that low, yields have rocketed higher and closed yesterday at 3.10% which is right around the same levels they temporarily peaked at in the Spring.  If yields continue higher in the coming days, a run to new highs will seem like a foregone conclusion which would act as a headwind for risk assets, but if yields start to stall out here, the chart of the 10-year yield will look more like a head and shoulders and provide a sigh of relief. 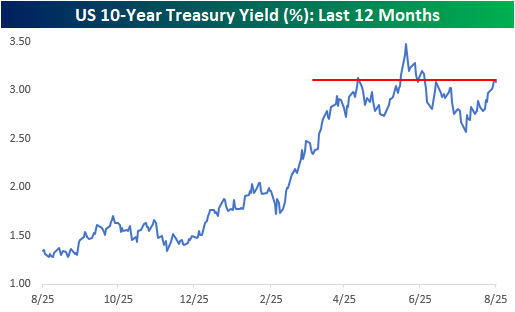 The two-year yield is another story.  Just yesterday, the yield finished the day right at 3.39% which was just four basis points (bps) below its June 14th high.  Like the 10-year, the direction of the 2-year yield in the coming days will likely play a big role in the stock market narrative for weeks to come. 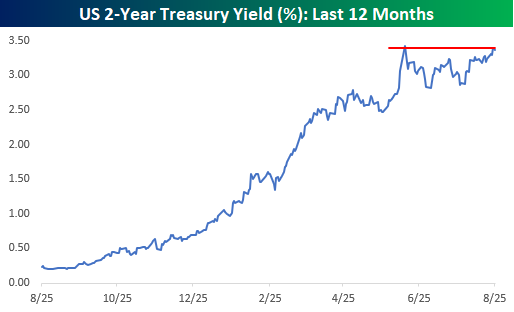 Whichever way yields move, the 10-year/2-year Treasury yield curve remains firmly entrenched at inverted levels and is one of an increasingly growing number of indicators out there suggesting that the economy is either on the verge of or already in a recession. 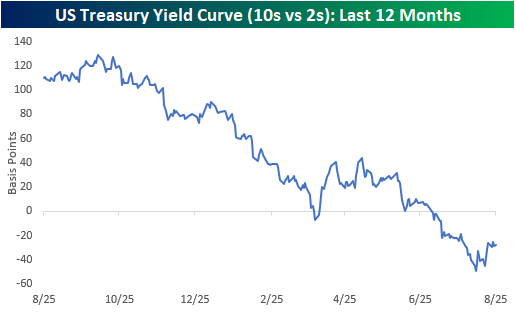