“You have people walking around with all the knowledge of humanity on their phone, but they have no idea how to integrate it.” – David Epstein – Range

Today’s quote of the day is one reason why Apple (AAPL) is the most valuable company in the world.  Was it not for the original iPhone, who knows how the revolution in mobile computing would have played out?  Now, we literally have a world of information at our fingertips.  If only we knew how to use it properly, instead of twerking videos on TikTok or yelling at everybody who bothers us on Twitter, who knows what we could accomplish?

Futures are higher this morning as positive headlines concerning trade between the US and China has lifted futures.  Positive China Trade headlines? That’s a blast from the past.  With higher equities, US Treasuries are lower and oil is rallying as sentiment related to the trajectory of the COVID outbreak continues to improve,

Standard and Poors, the firm responsible for maintaining the composition of the Dow Jones Industrial average announced the most significant reshuffling of the index since 2013 that will take effect after the close on Monday.  Salesforce.com (CRM) will replace Exxon Mobil (XOM), Amgen (AMGN) will replace Pfizer (PFE), and Honeywell (HON) will replace Raytheon (RTX).  The changes will take effect at the open on August 31st and will also coincide with Apple’s (AAPL) 4-1 split.  In the table below, we summarize the Dow as it now stands with each component’s weight in the index and how those components and weights will change effective 8/31.

The biggest change effective 8/31 will not even involve one of the components being added or removed.  Because the DJIA is weighted by each company’s share price, once AAPL’s split becomes effective, its weight in the index will drop from 12.20% down to 2.99%.  This is an interesting shift because so far this year AAPL’s 71% gain has had a positive impact on the DJIA of 1,455 points.  After the stock splits, AAPL’s total weight in the index will only be 2.99%, or the equivalent of 846 points.  In other words, AAPL could go to zero between next Monday and year-end and its impact on the DJIA for the year would still be a gain of over 2%!  Stock splits may be meaningless in terms of a company’s fundamentals but for a price-weighted index like the DJIA, they can have a large impact! That and the fact that the index only has 30 components is one big reason why much less money is indexed to the Dow than the S&P 500.

Besides the AAPL split, the other notable aspect of the index reshuffling is that the average share prices of the stocks going into the index are four times higher than the ones going out.  As a result, AMGN will go into the index with the third-highest weighting, CRM will have the fifth-highest weighting and HON will be the ninth highest-weighted component. 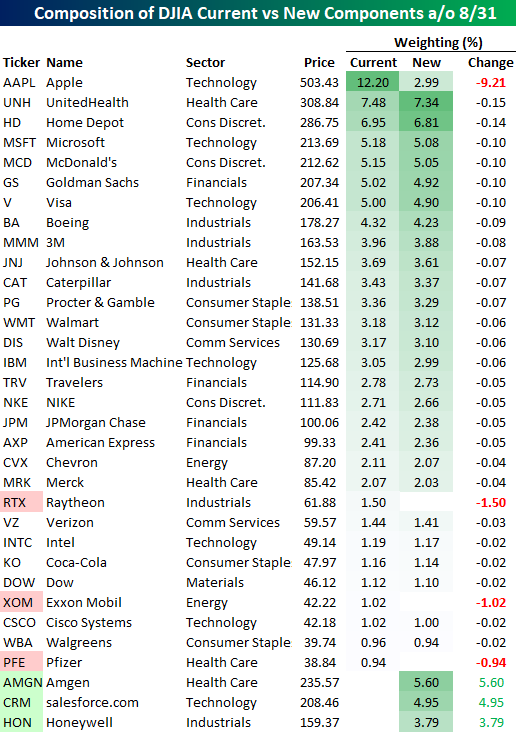