“If you want to succeed you should strike out on new paths, rather than travel the worn paths of accepted success.” – John D. Rockefeller

Trading this morning has been directionless, but it’s better than the alternative of weakness which has been the prevailing tone.  Fed Chair Powell’s Jackson Hole Speech on Friday continues to be the main focus of investors, and expectations for the tone of the speech are low.  Have you spoken to anyone in the last seven days who thinks Powell’s message will be a positive for the market?

In economic news this morning, Durable Goods for July were unchanged, which was weaker than expected, but ex Transportation, the reading came in better than expected (+0.3% vs +0.1%).  The only other report on the calendar is Pending Home Sales at 10 AM.

Treasury yields are mostly lower across the curve except for the two-year which is 2 bps higher and further flattening or inverting various portions of the yield curve.  In commodities, crude oil continues to run higher following reports yesterday that OPEC would consider cutting production and that has pushed WTI up to just under $95 per barrel.

As oil prices have moved back into the mid-90s per barrel and natural gas surges to multi-year highs, the Energy sector has gotten a jump. Since its July 14th low, the Energy sector has rallied more than 20% taking it from extreme oversold to extreme overbought levels in the span of six weeks, and as of yesterday’s close, the sector is less than 11% from its 52-week high in June.

Perhaps even more impressive than the rebound in price has been the about-face in the percentage of stocks in the sector trading above their 50-day moving average (DMA).  While not a single stock in the sector was above its 50-DMA less than three weeks ago, as of yesterday’s close all but one name was above that level (bottom chart).  The lone hold-out has been Baker Hughes (BKR), but even it is now just barely 2% below its 50-DMA.  Falling oil prices and the prospects of lower inflation have played an important role in the broader market’s summer rally, but the recent trends for oil and natural gas and stocks in the Energy sector may be starting to shift. 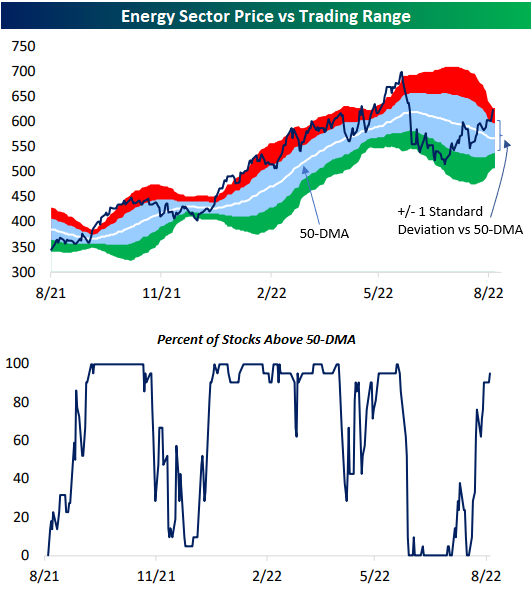