Futures are marginally higher this morning as investors continue to apprehensively await Friday’s speech by Fed Chair Powell in Jackson Hole. After a quiet day for economic data to kick off the week, today we’ll get updates on manufacturing and services activity with preliminary PMI readings from S&P 15 minutes after the opening bell.  Then, 15 minutes later, we’ll get the release of the August Manufacturing report from the Richmond Fed along with New Home Sales.  Investors aren’t expecting much in the way of strength from these reports, so hopefully for bulls, they don’t put too much upward pressure on interest rates as the 10-year yield is once again comfortably above 3%.

The chart below shows the S&P 500 over the last 12 months with red dots indicating every day that the 10-year yield finished north of 3%. Not a good thing for equity performance.  Will this be the market’s third strike or will the third time be the charm? 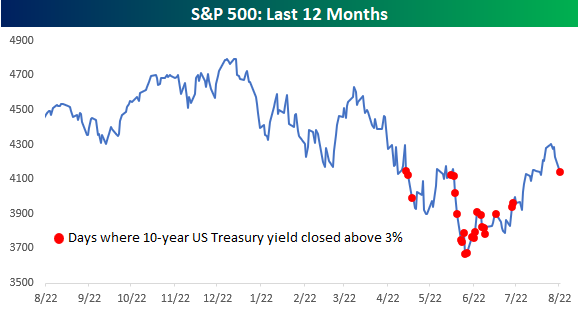 You can’t fault equity investors for being uneasy given the moves we have seen in the US Treasury market lately.  Back in mid-June, the year/year change in the 10-year yield was more than 200 basis points (bps), and it still stands at 177 bps.  That magnitude of change in the span of a year is practically unheard of during the careers of most people currently on Wall Street.  While there were similar spikes in yield coming out of the Financial Crisis and back in mid-2004, the only period where yields experienced an even greater increase was back in early 2000. 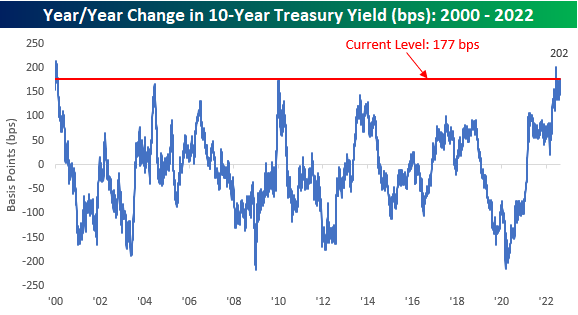