“An investment in knowledge pays the best interest.” – Benjamin Franklin

The Democrats have had their turn, and now the attention will turn to the Republican Party next week. After that, the race starts!  Whether it was the fact that the convention was confined to the virtual world or something else, the typical bounce that a ticket sees during their convention hasn’t materialized this year. In the last week, Biden’s odds for winning the election in November have actually declined a bit, while the odds of the Democratic party taking control of the Senate have seen a larger drop, falling from 61.2% down to 56.3%.  The lack of a bounce is good news for Republicans, but with their convention also taking on a more subdued tone next week, there’s no guarantee that the Trump ticket will see a bounce either.

In markets this morning, futures have been dropping all morning and aren’t far from their lows of the day.  While Asia was positive overnight, European equities started the day modestly lower and have been weakening all morning.  Weak economic data in Europe and trade issues with China are all weighing on sentiment.

Be sure to check out today’s Morning Lineup for a rundown of the latest stock-specific news of note, market performance in the US and Europe, updated flash PMI readings for August, trends related to the COVID-19 outbreak, and much more.

For a month that usually isn’t great for the market, this August has been shaping up just fine.  Through Thursday’s close, the S&P 500 was up 3.5% so far in August.  For the first 20 days of August, this month has been the strongest since the 4.26% gain in 2000, and going back to 1945 there have only been eleven other August months that saw a stronger performance in the first 20 days of the month. 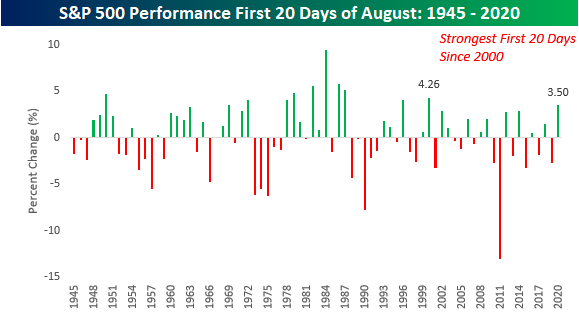