“What started as a temporary measure driven by the pandemic is now our new standard.” – Brian Cornell

After Walmart (WMT) capped off the strongest earnings season for US stocks in years, a bit of a hangover appears to have set in for investors this morning.  Futures were only modestly negative in the middle of the night, but there has been a steady drift lower throughout the early morning hours to the point where S&P 500 futures have traded down over 75 basis points as we type this. Looking for a culprit, earnings don’t fit as a narrative.  The most high-profile report this morning has been Target (TGT) which reported weaker-than-expected results, but the stock is only trading down 2%.  Hardly enough to warrant a decline of this magnitude. Trading in Europe may be to blame as major benchmarks in the region are down following a higher-than-expected inflation report in the UK that pushed the y/y rate above 10%.  With the FOMC Minutes on tap, maybe investors are fearing some hawkish text in the minutes.

Whatever the cause, after yesterday’s rally screeched to a halt just shy of the 200-day moving average (DMA), the bulls’ second effort looks pretty weak at this point.  We’ll see if Retail Sales either add to the misery or put a pep in the market’s step.

Today’s Morning Lineup discusses earnings and market news from Europe and the Americas, overnight economic data, and much more.

Walmart’s (WMT) earnings report after the close yesterday marked what we generally consider to be the unofficial end to earnings season.  If you’re a bull, you’re probably sad to see this one come to an end.  Through yesterday’s close, the S&P 500 was up over 10% since earnings season began July 8th, and that represents the best earnings season performance for the index since the Q2 reporting period in 2009!  Since the start of 2009, the just-completed earnings season also marks the 13th time that the S&P 500 has rallied 5% or more during an earnings season (six weeks from the Friday before the first big banks report numbers).

With strong performance during the reporting period, the natural question for investors is whether the gains we have seen have been borrowed from the future.  Looking back at prior strong earnings seasons, that doesn’t appear to be the case.  In the 12 prior reporting periods, the S&P 500’s median change from the end of earnings season through quarter-end was a gain of 2.38% with positive returns 75% of the time.  That’s actually modestly better than the median gain of 1.75% and positive returns 73% of the time for the remainder of all other quarters.

Instead of borrowing from future gains this earnings season, maybe the S&P 500 was just collecting on its ‘loan’ during the June swoon? 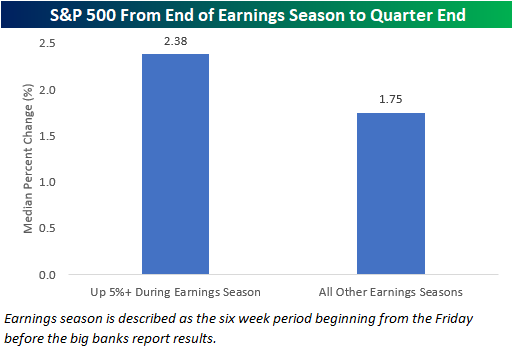