“The most dangerous people in the world are very smart traders who have never gotten their teeth kicked in.” – F. Helmut Weymar

There’s not a whole lot going on in terms of newsflow to kick off this mid-August Summer week, but futures are higher as convention season kicks off, first with the Democrats and then the Republican party to follow next week. Normally, the selection of a VP candidate and the subsequent convention provides a boost in polling for challenger candidates, but so far Biden hasn’t seen any bounce in his election odds since the VP announcement last week.  Granted, he is already ahead in polling, so that could be playing a role, but we’ll see how betting market trends play out over the course of this week.

In economic data, homebuilder sentiment must have been so good that they released it early.  The report was supposed to be released at 10 AM eastern but instead came out at 8:07.  While economists were expecting the headline reading to come in at 74, the actual reading was tied for a record high at 78.  Obviously, homebuilders are feeling good!

Empire Manufacturing for August was just released and, while positive at 3.7, it missed the consensus expectation of 15.0.

If there has been a reliable trend in the market over the last several years, it has been the leadership of the Technology sector.  While there have been days or weeks where tech lags and value rallies, more often than not, it all comes back to tech, especially when the market is rallying.  So far this quarter, though, tech hasn’t been leading, and it hasn’t even been playing second fiddle.  In fact, Technology finds itself in the unconventional position where it is actually underperforming the S&P 500 quarter to date (QTD)!  While sectors like Consumer Discretionary (1276%), Industrials (12.63%), and Materials (11.02%)  are all up by double-digit percentages, the Technology sector’s ranking in terms of QTD performance is actually 6th out of 11 at 8.77%.  What a dog. 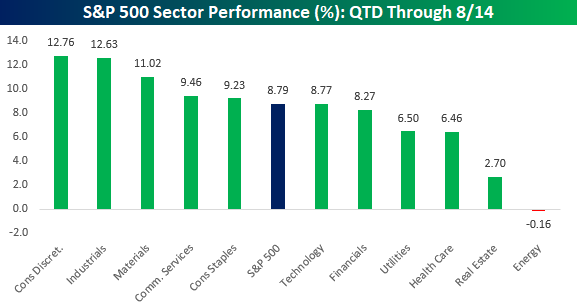