“You should always go to other people’s funerals, or they won’t go to yours.” – George Herman Ruth

Investors generally expected a weak tone out of this morning’s updates to Building Permits and Housing Starts, and weak homebuilder sentiment provides a clue as to why.  Yesterday’s update on homebuilder sentiment from the NAHB for the month of August showed that the US residential housing market is rapidly cooling off.  Take the last four months, for example.  In three of these four, the headline sentiment reading from the NAHB has missed expectations by at least five points.  Historically, the reported reading in this index tends to come in by +/- two points relative to expectations, so misses of five or more aren’t very common.  Put another way, before this May there were only ten other months since early 2003 where the headline reading missed expectations by five or more points. 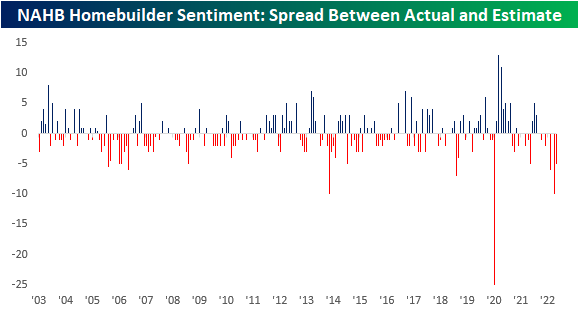 Besides the fact that the last four months have been so weak relative to expectations, it has also now been nine months and running that the headline homebuilder sentiment report has been either in line with or lower than expectations.  The last time Homebuilder sentiment was better than expected was back in November!  The current streak without a better-than-expected reading now ranks as the second longest since at least 2003.  The only streak that was longer came during the early stages of the housing crash in August 2006. 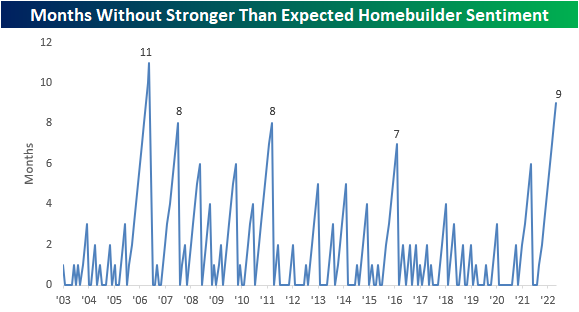