Time is the friend of the wonderful company, the enemy of the mediocre.” – Warren Buffett

For the first time in 21 weeks, jobless claims dropped below a million (963K), which was below consensus forecasts for 1.1 million.  Continuing claims also came in lower than expected but by a narrower margin.  963K is still high by all historical comparisons outside of the last several months, but it indicates a continuation of a move in the right direction.  Regarding stimulus talks, if it was going to take a sense of urgency to get Democrats and Republicans to come to an agreement, the stock market trading right near record highs and jobless claims back below a million aren’t providing any ammunition.

Be sure to check out today’s Morning Lineup for a rundown of the latest stock-specific news of note, market performance in the US and Europe, new FHFA fees on mortgage refinancings, trends related to the COVID-19 outbreak, and much more.

Small caps have been outperforming large gaps in recent weeks off the March lows after the Russell 2000 was decimated during the COVID crash.  Over just the last week, the Russell 2000 has outperformed the S&P 500 by nearly a full percentage point, but as shown in the chart below, the index still has some catching up to do.  Besides the fact that small caps saw their peak relative to large caps earlier in the last decade, they have only erased barely more than half of the underperformance they saw from the S&P 500’s February peak to March trough. 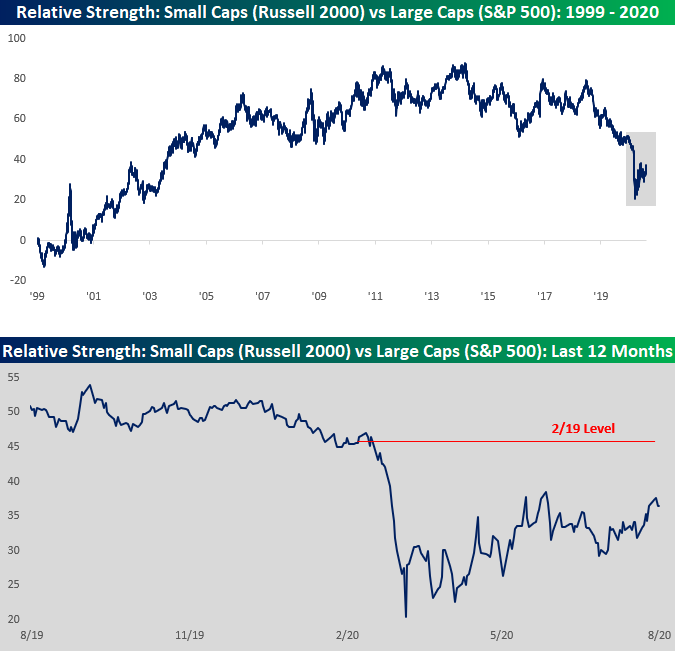