“Pressure is what you live for… if you are going to be successful in life, you’re going to have pressure.” – Jack Nicklaus

The S&P 500 has been down on three of the four trading days this week, but it is still up over 1%.  Barring a sharp reversal from the current level in the futures market, this would be the fourth positive week in a row.  That would be the longest winning streak since early November of last year. Today’s only economic data is Import Prices at 8:30 Eastern (weaker than expected: -1.4% vs -1.0%) and then Michigan Confidence at 10 AM.  As has been the case in the last couple of months, traders will be watching the level of inflation expectations in the Michigan report closely.  Barring any major surprises in the data, and given the fact that it’s a Friday in August, activity in the afternoon is likely to slow down.

As mentioned above, futures are moderately higher while European equities are trading close to either side of the flat line, but drought conditions in the region continue to raise concerns over transportation and the region’s energy needs heading into winter.  While inflation data here in the US was positive this week, both France and Spain reported their highest y/y increases in over 30 years.

Turning to China, five state-owned companies announced this morning that they will voluntarily delist from the NYSE.  While none of these companies are particularly active on the NYSE, the symbolic nature of the delisting should not be understated and only further exacerbates the rising tensions between the two countries.

Falling commodity prices have been one reason for optimism that inflation pressures may have peaked, but over the last five trading days, commodity ETFs in our Trend Analyzer tool have seen some strong moves.  Energy-related ETFs have surged more than 6%, while base metals and the broader commodity space in general, have rallied 5% or more.  Ag-related ETFs haven’t been as strong relatively speaking, but they’ve still managed to rally over 2%.  The only area of weakness in the space has been in precious metals, which have been led lower by gold. 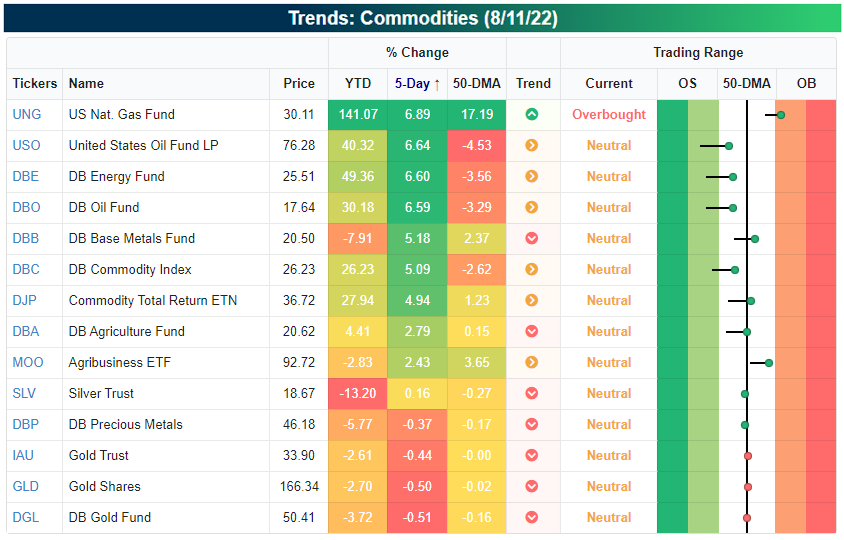