In reading the quote above, critics of the President would think that it’s a description of the current attitude in the White House towards the Covid-19 outbreak.  It’s actually from the book, The Great Influenza: The Story of the Deadliest Plague in History. Back in 1918.  Amazingly, President Wilson never made a single public statement related to the flu pandemic and acted like it never happened and instead had a singular focus on mobilizing the country for WWI.

In looking at today’s “Overnight Trading” chart from the Morning Lineup, it looks the exact same as yesterday’s chart.  For the sake of the bulls, let’s hope that today’s intraday trading for US stocks isn’t a re-run of Tuesday as well.

Joe Biden’s selection of Kamala Harris wasn’t particularly surprising to the market as she was already considered one of the leading contenders along with Susan Rice, and the pick makes sense for Biden as Harris will likely be solid on the campaign trail and go after Trump in the way that a VP candidate is expected to. While the selection isn’t likely to provide much of a boost for Biden, at this point it likely won’t hurt him either. Harris wasn’t exactly successful as a Presidential candidate in her own right, but back in 2008 neither was Biden and that didn’t hurt Obama.

On the inflation front, after yesterday’s PPI doubled expectations (+0.6% vs 0.3% forecast), today’s CPI for July saw the exact same print on a headline basis relative to the same consensus expectation for an increase of 0.3%.

Since last Thursday’s close, the S&P 500 is down 0.46%, but the decline has been far from broad-based.  As shown to the right, four sectors are up over 1% during that period with Industrials and Financials both rallying more than 4%.  On the downside, Technology has been the main drag with a drop of over 3.6% while Communication Services has dropped 1.8%. Of the 500 stocks in the index, nearly two-thirds are actually up during that span, so the vast majority of stocks in the index and the US for that matter have risen during this period. 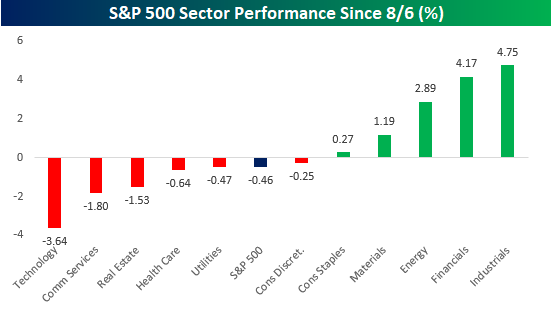