“My fellow Americans, I am pleased to tell you today that I’ve signed legislation that will outlaw Russia forever. We begin bombing in five minutes.” – Ronald Reagan, 8/11/1984

Politicians are always getting themselves into trouble with hot mics, and with US Presidents, it has happened more than once with respect to Russia.  Besides the Reagan comment above, remember ten years ago when President Obama was caught telling Russian President Medvedev that he would have more ‘flexibility’ after the election?  Outside of Russia, President GW Bush was once caught on audio at a rally telling VP Cheney that a certain New York Times reporter was a “major league ___-hole”? And then there’s President Biden.  Who can forget the ceremony for the signing of the Affordable Care Act into law when Biden as VP grabbed the President and told him that “This is a big f___-ing deal!”

Politicians live their lives under the camera, so it’s only natural that they get caught making these embarrassing comments from time to time, but in a society where everything is recorded, a parent’s advice that you should never say or do anything that you would be embarrassed for your parents to see or hear is more fitting than ever.

In markets today, futures suggest that yesterday’s rally will have additional legs, but PPI and Initial Jobless Claims will have a say over whether these gains can continue throughout the trading day.  PPI was much weaker than expected at both the headline and core level and jobless claims were right about in line with expectations.  Treasury yields are lower at the long end of the curve, bitcoin is higher and crude oil prices are back above $90 even as OPEC says it sees the market moving into a surplus at some point this quarter.

Usually, when the market rallies, the VIX declines, and after yesterday’s rally, the VIX closed below 20 for the first time since April 4th after a run into the low 30s during the worst of the market declines earlier this year.  One notable aspect of the sell-off during the first half of 2022 was the fact that the VIX didn’t reach extremely high levels that have been typical of prior sell-offs.  Therefore it had less distance to fall in order to get back below 20.  You’ll notice in the chart below that during the rally in late Q1, the VIX also managed to briefly close below 20 before bouncing back into the 30s, so it will be important to watch and see whether it can stay around these levels in the future. 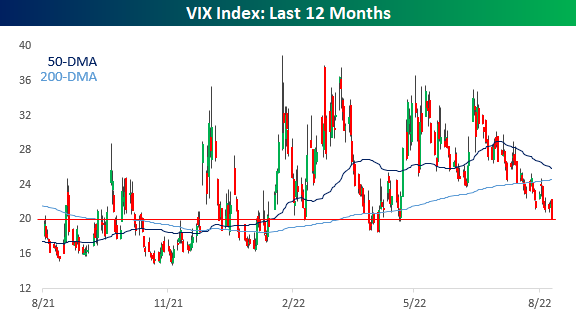 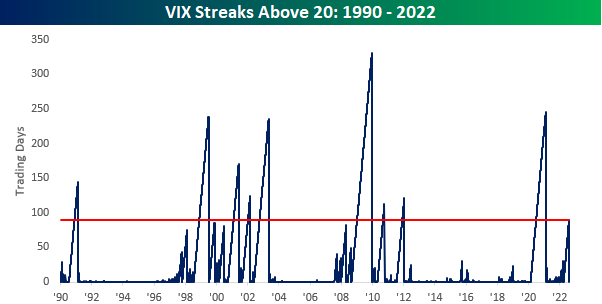