It’s been a quiet session overnight, and futures are currently indicating a flat open in the S&P 500 and a positive open in the Nasdaq (what else is new?).  The big story overnight has definitely been the rally in Chinese equities.  While the CSI 300 opened down slightly at the open, it immediately rallied into positive territory and finished up over 1%.  Today’s gain not only marks the 8th straight day of gains but also the 8th straight day where the index has rallied more than 0.5%.  In the history of the CSI 300 (since 2002) the only other time the index saw that many consecutive gains of more than 0.5% was back in April 2007, right in the middle of that massive bubble.

Shifting focus back to the US, the key indicator to watch today is Jobless Claims at 8:30.  Consensus expectations are for 1.375 million which would be down from last week’s reading of 1.427 million. That would extend the record streak of w/w declines up to 14.  Despite that record run of w/w declines, in the last ten weeks, Jobless Claims have been higher than expected nine times.  Talk about threading a needle!

Be sure to check out today’s Morning Lineup for a rundown of the latest stock-specific news of note, auto sales in China, global and national trends related to the COVID-19 outbreak, and much more.

As you’ve seen each day in the Morning Lineup, case counts and hospitalizations in the US have only been trending higher over the last few weeks.  While conditions haven’t improved in the US, you’ve no doubt seen the trends in Europe, which have been improving.  Given the diverging paths of the outbreak on each side of the Atlantic, we’ve seen parts of the US rollback re-opening while Europe continues to move forward.

Against this backdrop, you would think the European economy and equity markets would be doing better than the US, but at this point that hasn’t been the case.  The chart below shows the performance (in dollar-adjusted terms) of the S&P 500 and Europe’s STOXX 600 since both indices bottomed on 3/23.  In the three and a half months since the low, Europe’s STOXX 600 is up an impressive 37.8%.  Over that same span, though, the S&P 500 is up over 41%! Now, when we’re talking such large numbers, a difference of less than four percentage points doesn’t seem like much, but it seems a bit surprising that US equities are even outperforming at all.  Unless the market has it wrong, the message it’s sending is that looking out six to nine months, the US will find itself in a better place than Europe. 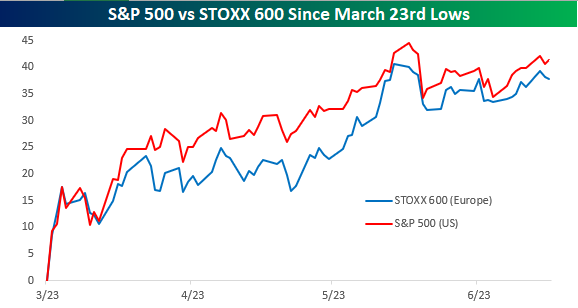