“Politics is not a game, but a serious business.” – Winston Churchill

Given the state of politics on both sides of the Atlantic, most would probably take issue with Churchill’s description of the political process, especially the second part.  Anyway, it’s always interesting to see instances where a CEO announces his or her resignation from a company and its stock rallies.  How must the individual leaving the company feel watching the market cap of the company rise now that they’re gone?  Talk about a lack of a value-add!  Anyway, as bad as it must make a CEO feel, how must Boris Johnson feel today that British stocks and the pound are all rallying on news of his resignation?  There’s a reason you need a thick skin to be successful in politics.

Stocks aren’t just rallying in Europe this morning as major indices around Europe and the world along with US futures are all in positive territory.  The S&P 500 has been higher in each of the last three trading days, and if early gains hold today would be the fourth straight day of gains.  In order to get there, though, we’ll have to get through Jobless Claims at 8:30, Energy inventories at 10:30, and then two Fed speeches from Waller and Bullard this afternoon.  Jobless claims came in at 235K which was slightly higher than expected and the highest level in nearly six months.

In today’s Morning Lineup, we discuss moves in Asian and European markets, reports of a $200+ stimulus plan in China, and economic data from around the world.

As mentioned above, if today’s early gains hold today would be the fourth straight day of gains for the S&P 500.  That may not sound all that impressive (it isn’t), but in a year like 2022, it is enough to be tied for the longest winning streak of the year. Earlier this year in Q1, there were three other streaks of similar duration, but in Q2, the best the S&P 500 could do was three days. 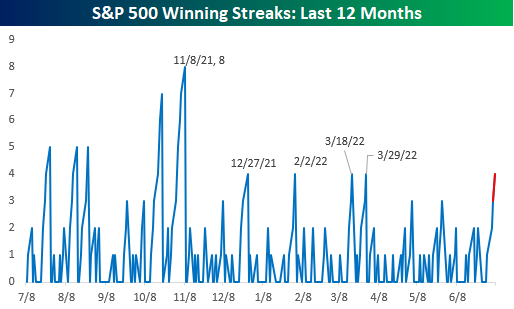