“There is no free market for oil. It’s controlled by a cartel, OPEC.” – Frederick W. Smith

Stocks are poised for a lower open this morning, oil prices are clinging to $100, and the 2s10s yield curve is modestly inverted.  While equity futures have been lower all morning, they have been trading in a relatively tight range.  That’s likely to change at around 10 AM Eastern with the release of the ISM Services report and the May JOLTS report. Then at 2 PM, we’ll get the release of the Fed minutes from the June meeting.

In today’s Morning Lineup, we discuss moves in Asian and European markets, along with a quick look at the latest moves in the euro and the developments in UK politics.

Less than a month ago today on June 8th, the S&P 500 Energy sector was up over 65% YTD, up more than 60 percentage points more than the next closest sector, and 90 percentage points ahead of the worst performing sector (Consumer Discretionary).  Since then, Energy stocks have come crashing back down to earth, and while it remains the only sector up YTD, its lead over other sectors has narrowed.

With a YTD gain of 28.1%, the Energy sector ETF (XLE) leads the next closest sector, Utilities, by nearly 30 percentage points and still has a lead of nearly 60 percentage points over the worst-performing sector – Consumer Discretionary. 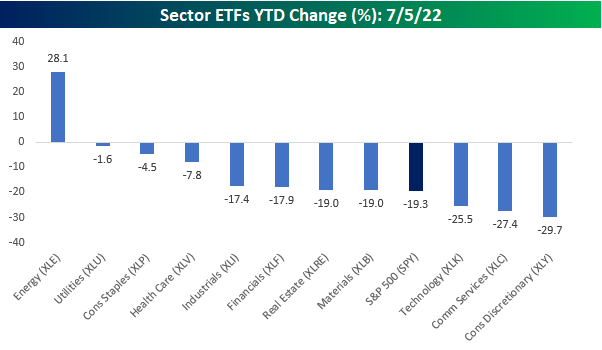 When we look at how far the Energy sector has declined from its 52-week high and compare that decline to how far other sectors have dropped from their 52-week highs, Energy is no longer a standout.  In fact, with Energy down 25.3%, it has now declined more from its 52-week high than the S&P 500 has declined from its high (-20.4%).  Of the eleven sectors, only three – Technology (XLK), Consumer Discretionary (XLY), and Communication Services (XLC) – have seen larger drawdowns from their respective highs than the Energy sector.

Investors tend to view their holdings from the lens of where they are trading relative to their peaks.  With Energy now down just as much or more than most other sectors, plus the fact that a lot of inflows into the sector likely came closer to the June high, even the one sector that has been a bright spot for the market is probably not making too many investors happy these days. 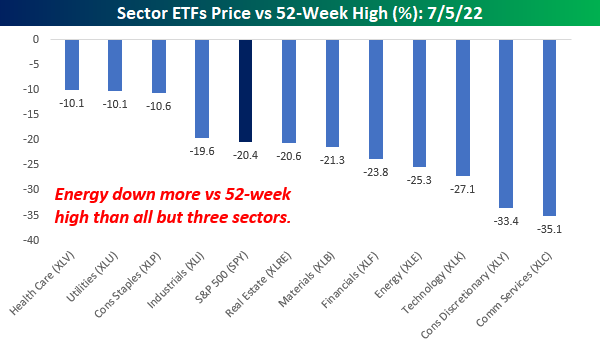