Quote of the Day: “The person who is the star of previous era is often the last one to adapt to change, the last one to yield to logic of a strategic inflection point and tends to fall harder than most.” – Andrew Grove

The big four of Apple (AAPL), Amazon (AMZN), Alphabet (GOOGL), and Facebook (FB) all reported last night, and with the exception of Alphabet, they all came through with very strong reports. The big event is now behind us, and next week the economy will get added attention with both the ISM Manufacturing and Non Manufacturing reports as well as the July Non-Farm Payrolls report.  Earnings and economic data. We can’t wait!

Be sure to check out today’s Morning Lineup for a rundown of the latest stock-specific news of note, key earnings and economic news in Europe and the US, trends related to the COVID-19 outbreak, and much more.

We doubt Andy Grove ever had Intel, the company that in the 1990s he transformed into the world’s largest semiconductor company, in mind when he wrote the above words.  However, with the company announcing last week that it would delay the rollout of its 7nm manufacturing process and missing the boat on yet another industry shift in the semiconductor sector, the words couldn’t be more applicable today.  While Intel was basically “the semiconductor industry” in the 1990s, today its dominance is a shell of its former self.  The stock is down nearly 20% YTD and trading closer to 52-week lows than 52-week highs.

While Intel flounders, the rest of the semiconductor sector has been going in the opposite direction.  Intel is the worst-performing stock in the Philadelphia Semiconductor Index (SOX) this year, but the average YTD performance of the 30 stocks in the index has been a gain of over 15%. Similarly, since the March lows, the average stock in the SOX is up over 65%.  INTC? It’s down over 3% and the only stock in the index down during that time. Talk about falling harder than most. 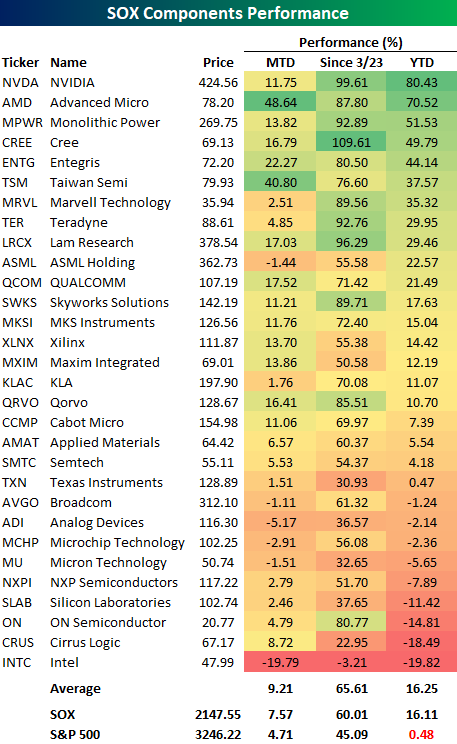