Quote of the Day: “The secret to investing is to figure out the value of something – and then pay a lot less.” – Joel Greenblatt

Did traders who bought Eastman Kodak (KODK) in the $2s last week figure out Greenblatt’s “secret” to investing?

Well, we got that over with.  We have all just experienced what will likely be the worst quarter of economic growth in our lifetimes. At least it better be!  Q2 Advance GDP was just released, and while economists were forecasting an annualized decline of 34.5%, the actual reported number was a bit better at -32.9%.  In any other environment, a GDP report that was 1.6 percentage points better than expected would be extraordinary, but when you’re dealing with numbers in the 30s, it’s no big deal.  In other economic news, Initial Jobless Claims were better than expected, but Continuing Claims came in considerably higher.

Be sure to check out today’s Morning Lineup for a rundown of the latest stock-specific news of note, key earnings and economic news in Europe and the US, trends related to the COVID-19 outbreak, and much more.

Since the Nasdaq’s most recent peak on 7/20, it should come as no surprise that Technology has been a laggard.  As shown in the chart below, the sector has been the worst performer falling over 2%.  Interestingly enough, the only two other sectors that are down during this period are Telecom Services and Consumer Discretionary, and these declines are also due primarily to weakness in large-cap names like Amazon (AMZN), Alphabet (GOOGL), and Facebook (FB).  Outside of these three sectors, every other sector has rallied since the close on 7/20, and all but one of them (Health Care) are up over 1%.  So, while the S&P 500 has been bogged down by Tech and other mega-cap “tech-like” stocks, other areas of the market have been holding up just fine.  Sectors like Real Estate, Energy, Consumer Staples, and Financials are all up 2.5% or more. 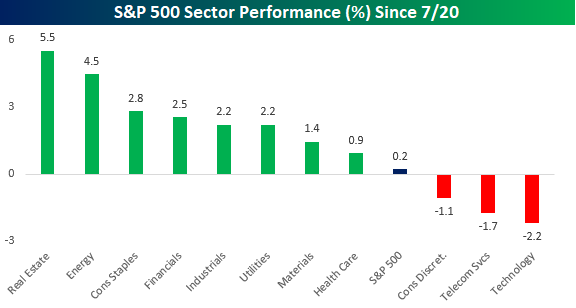