“In a world that changing really quickly, the only strategy that is guaranteed to fail is not taking risks.” – Mark Zuckerberg

After Fed Chair Powell downplayed the significance of the initial read on quarterly GDP reports and then today’s negative print for Q2 GDP, conspiracy theorists will say yesterday’s comments were made so the Fed could downplay today’s negative print.  Whatever.  We now have seen two straight quarters of negative GDP, and while that may not meet the ‘official’ definition of a recession, it still doesn’t change the fact that the US economy shrank in the first half.  Add to that, initial jobless claims remain right near their post-COVID highs.  This morning’s print of 256K was above last week’s print of 250K, but last week’s reading was subsequently revised up to 261K meaning that claims actually fell this week.

Futures have actually rallied a bit since the 8:30 print of GDP and Jobless Claims, but they are still indicating a modestly lower market at the open.  The Q2 GDP report was an important report, but who wasn’t expecting a weak print?  More important than that report will be earnings reports from Amazon.com (AMZN) and Apple (AAPL) after the bell today.

Today’s Morning Lineup discusses earnings news out of Europe and the Americas, the potential budget deal between Manchin and Senate Democrats, economic data from around the world, and much more.

Even in the current volatile environment, a 4% rally in the Nasdaq is a big move.  In the index’s entire history dating back to 1971, there have only been 86 prior occurrences, and yesterday’s rally was the largest one-day gain since early April 2020 just after the COVID crash lows.  The chart below shows every 4% rally in the Nasdaq over its history since 1971, and outside of the period from 2000 to 2002, and to a lesser degree the Financial Crisis, moves of this magnitude were sporadic.  The most notable aspect of the chart below, however, has to be the fact that in the 50+ year history of the Nasdaq, nearly half of all the index’s rallies of 4%+ occurred in the three-year window from 2000 to 2002. 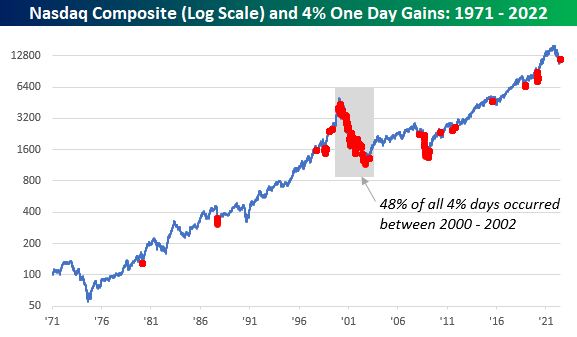 Given the near majority of all 4%+ rallies in the Nasdaq occurred during the most severe bear market in its history, maybe big moves like yesterday aren’t such a good thing in terms of the Nasdaq’s future direction.  In the chart below, we show the index’s forward returns following prior 4%+ rallies as well as 4%+ rallies, like yesterday, that were the first occurrences in at least three months.  As shown in the chart, median returns following all 4%+ rallies (light blue bars) are mixed relative to overall average returns since 1971, but when the 4%+ rally is the first in at least three months, forward returns have actually tended to be above the historical average for all periods since 1971.  It’s hard to say the coast is now clear following yesterday’s big rally, but historically speaking, big one-day rallies for the Nasdaq after a long absence have historically been followed by above-average returns. 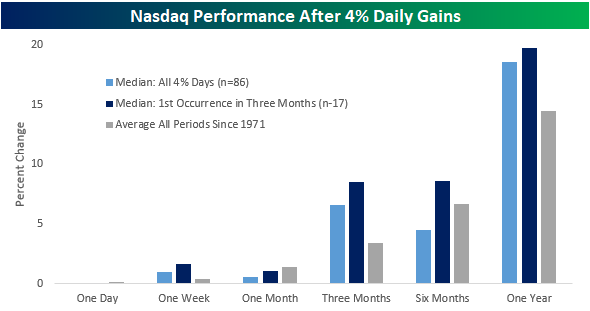