“Learning to fly is not pretty but flying is.” – Satya Nadella

We’re nearly halfway through what has been billed as the most critical week of earnings season, and based on where futures currently reside, equities are down just marginally on the week.  Don’t rest yet, though.  Between today’s FOMC meeting, tomorrow’s GDP report, and some critical earnings reports on Friday, we still have a number of potential bumps on the horizon.  Economic data released so far today has been better than expectations, and the only report left on the calendar is Pending Home Sales at 10 AM.

Today’s Morning Lineup discusses earnings news out of Europe and the Americas, a preview of the FOMC announcement today, economic data from around the world, and much more.

One of the primary reasons stocks have put up miserable performance numbers this year stems from the tighter monetary policy of the Federal Reserve.  For that reason, we found it ironic that on all three days the FOMC has hiked rates this year, stocks rallied. On 3/16, the Fed kicked off the current rate hike cycle with a 25 bps increase in the Fed Funds rate, and in response, the S&P 500 rallied 2.2%.  Seven weeks later, the size of the rate hike doubled, but stocks still rallied with the S&P 500 surging just under 3% in what turned out to be the second-best day of the year.  Six weeks later on 6/15, in response to the mirage of surging inflation expectations in the Michigan sentiment report, the Fed dropped a 75 bps hike on the market and yet stocks still managed to rally with the S&P 500 rising 1.5%.

In other words, the S&P 500 is down 17.7% this year, but if you had only invested in the market on days when the FOMC hiked rates, you would be looking at a YTD gain of 6.8% in just three days.  Conversely, if you had avoided the market on those three days and been long the rest of the year, you’d be down 23% YTD.  Nobody ever said the market had to make sense. 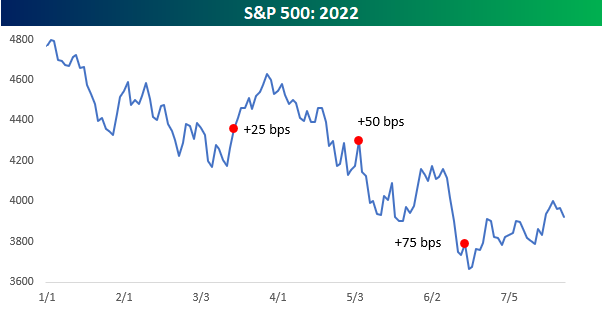