“Learn everyday, but especially from the experiences of others. It’s cheaper!” – John Bogle

Futures are indicated lower this morning as Chinese equities sink on continued fears of government crackdowns on that country’s tech sector.  We’ve seen a bit of a bounce off the lows, though, as we get closer to the opening bell in the US.  If that sounds familiar, it should since it was the exact same setup we had yesterday. While the issues in China are troubling for investments based in China, it should make US assets more attractive as capital flees that area of the world and looks for a safer home.

The week may have started off quietly yesterday, but the real fun begins today as there are not only a number of economic reports but some of the largest companies in the world will start releasing results.  In the case of economic data, Durable Goods came in weaker than expected, but last month’s release was revised higher which somewhat netted this month’s weakness out.  Later on today, we’ll get releases on Home Prices, Consumer Confidence, and the Richmond Fed Manufacturing sector.

On the earnings front, after the close, we’ll get reports from Alphabet (GOOGL), Apple (AAPL), and Microsoft (MSFT).  On a combined basis, these three companies alone are expected to report combined revenues of about $175 billion!  As if these three companies weren’t enough, we’ll also hear from Advanced Micro (AMD), Chubb (CB), Mondelez (MDLZ), Starbucks (SBUX), and Visa (V).

Yesterday was a big day for the crypto-currency markets, but Amazon’s denial that it would accept bitcoin payments by year-end has resulted in a giveback of some of those gains.  Bitcoin’s rally yesterday also coincidentally (or not) stalled out right at the same levels it stalled out at in mid-June, so for people to feel more comfortable going forward, they’ll likely want to see prices trade and stay above $40,000. 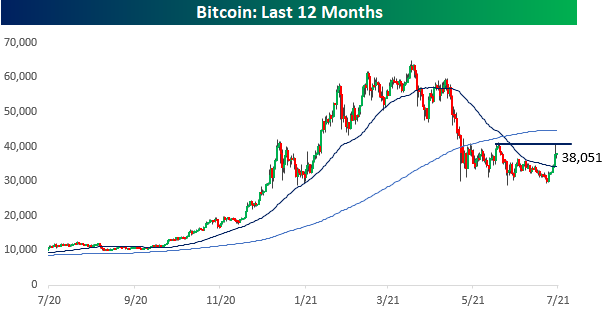 In the case of ethereum it’s a similar story as the rally in ether stalled out right near $2,400 which is right where it stalled out earlier this month.  The only difference between now and then is that while the last rally also failed at the 50-DMA, this time around, ether has still been able to hold above that level. 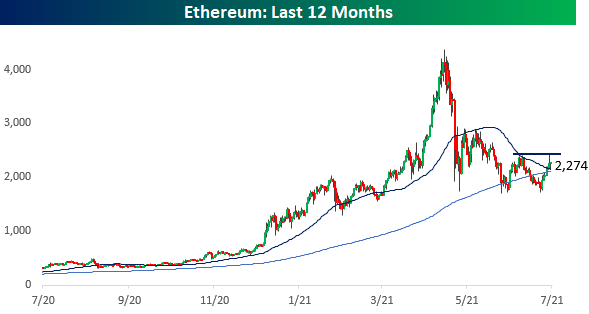