“We don’t get paid for activity, just for being right. As to how long we’ll wait, we’ll wait indefinitely.” – Warren Buffett

What a difference a few days makes.  While the week started off with major concerns regarding the Delta variant, three straight positive days and an up morning in the futures market later, and the Delta variant is the last thing on investor’s minds.  Strong earnings in the social media space, as well as earnings from American Express (AXP), are pushing futures higher while disappointing results from Intel (INTC) and Boston Beer (SAM) have been set aside.  As far as the social media sector is concerned, the solid results from Snap (SNAP) and Twitter (TWTR) have pushed the market cap of SNAP up above $100 billion while Facebook (FB) now finds itself back in the trillion-dollar club.

As we head into the weekend, we wanted to provide a quick snapshot of some of the major US indices across various market cap ranges.  Starting at the low end, small caps plunged earlier this week to multi-month lows before regaining steam in the middle of the week.  On Thursday, the Russell 2000 was once again the notable laggard maintaining what has been a string of lower highs and lower lows for the last several weeks.  For now, the Summer weakness continues to be noise within a multi-month period of consolidation, but there has been increasing pressure on small caps.

Like small caps, mid-caps have also been laggards for the last several months.  As proxied by the S&P 400 Mid Cap Index, we have seen a steady string of lower highs and lower lows since its peak in late April.  The index is finishing the week well off its lows, but the downtrend remains in place.

Moving up to the market cap spectrum, large caps have been the area of most strength.  As shown by the Nasdaq 100 and S&P 500, both indices have patterns that are as far from downtrends as could be possible. In fact, if the current levels in the futures market hold, both of them will be close to all-time highs. 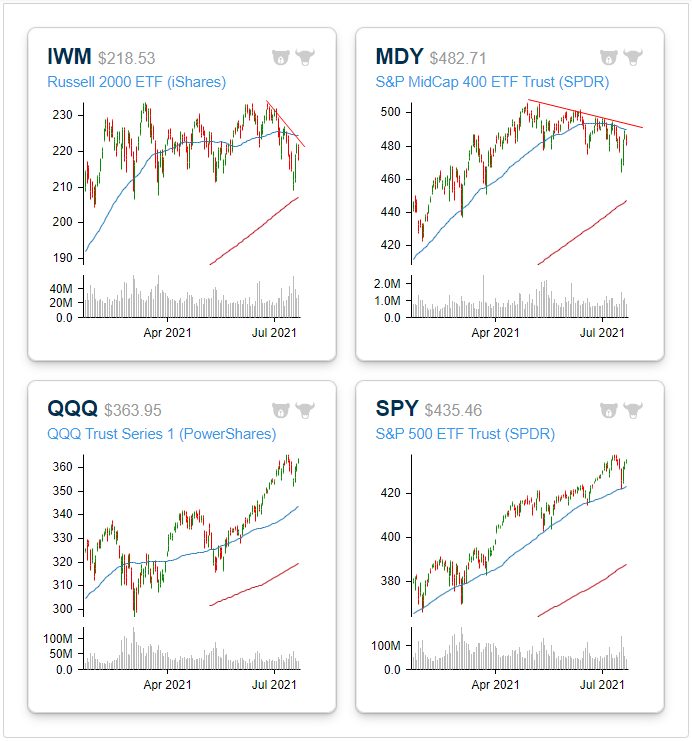