“Lots of companies don’t succeed over time. What do they fundamentally do wrong? They usually miss the future. I try to focus on that: What is the future really going to be?” – Larry Page

After a disheartening late-day decline yesterday, futures are attempting a ‘turn-around Tuesday’ this morning. In addition to a handful of high-profile earnings reports from IBM, Johnson & Johnson (JNJ), and Lockheed Martin (LMT), we also just got the latest update of Building Permits and Housing Starts which came in mixed relative to expectations.  Building Permits were slightly higher than expected and Housing Starts missed slightly.

Another notable report this morning was the latest Merrill Lynch Fund Managers Survey which showed widespread pessimism on the part of respondents.  According to the report, exposure levels to risk assets were taken down to their lowest levels since the Financial Crisis while cash levels are higher now than at any other time since 2001!

Today’s Morning Lineup discusses earnings news out of Europe and the US, handicapping the ECB decision, and economic data from around the world.

Everyone wants to see inflation subside, and we welcome any sign of a pullback in upward price pressures.  The latest datapoint optimists are glomming on to is the fact that the national average price of a gallon of gas dropped below $4.50 per gallon yesterday after touching $5 as recently as mid-June.  That’s a decline of nearly 10%!

The move lower in gas prices is welcomed by us more than anybody, but before we all close the book on this chapter in the inflation saga and let our guard down, we should keep in mind that from a seasonal perspective, we are in what has historically been a relatively weak time of year for prices at the pump.  Prices typically peak for the year around Memorial Day, trade sideways through the summer, and then decline into year-end.  Second, while prices are down sharply after the last month, it follows what was a parabolic increase in prices year to date through mid-June.

We’re pleased as anyone with the direction of gas prices over the last month, but just as we’ve seen countless examples of the market or individual stocks in downtrends stage an impressive rally only to give it all back again, let’s hope this move lower in gas prices isn’t a false alarm in the other direction. 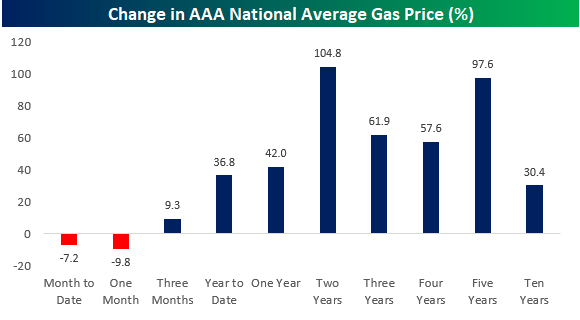