“Let me assert my firm belief that the only thing we have to fear is fear itself” –  Franklin D. Roosevelt

Economic data is light today with Homebuilder Sentiment the only report on the calendar.  The pace of earnings will pick up as the week goes on, but already we’ve already had reports from Bank of America (BAC) and Goldman Sachs (GS).  Neither company had any major landmines, and while BAC is flat in the pre-market, GS is up over 3%.

Today’s Morning Lineup discusses earnings news out of Europe, action in Asian and European markets, and economic data from around the world.

Last Friday’s rally helped to end what was a lousy week up until that point on a positive note.  Heading into the day, the S&P 500 was down for five straight days, and even after the rally, finished the week down nearly 1%.  But with a strong finish and futures trading where they are right now, both the S&P 500 and the Nasdaq are poised to erase just about all of last week’s losses at the opening bell.

There’s been an awful lot of bottom talk circulating over the last few days, and the charts of the Nasdaq 100 (QQQ) and S&P 500 (SPY) have been showing some positive signals as they both managed to make higher lows last week.  There’s still a lot of resistance to work through on the upside, though, as the 50-day moving averages and prior highs from this summer loom above.  Given the market’s tendency to disappoint bulls in prior rallies this year, traders are increasingly less likely to give the market the benefit of the doubt and give an all-clear. 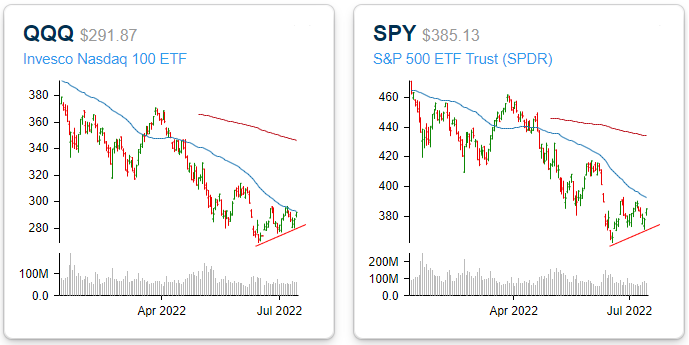