“The erosion of our confidence in the future is threatening to destroy the social and the political fabric of America.” – President Jimmy Carter 7/15/79

43 years ago today, President Carter addressed the nation in what has become the now famous crisis of confidence speech.  Today, we find ourselves in a very similar situation with rampant inflation and sentiment among Americans at multi-decade lows.  Reading through Carter’s speech today, you would have thought he was talking about the present-day United States.

Unfortunately, from an economic perspective, Carter’s speech was followed by two separate recessions (the double-dip) in the next four years.  The first started five months later in January 1980 and lasted just six months.  The expansion that followed lasted only a year, and in January 1981 a second contraction began lasting 16 months in what at the time was tied for the longest recession since the Great Depression.  On a more positive note, there have only been 35 trading days where the S&P 500 closed at a lower level than where it was at the time of Carter’s speech, and the maximum downside was 4%.

This morning, futures are indicated higher in what bulls hope will end a five-day losing streak for the S&P 500, but first, we’ll have to get through the July Empire Manufacturing report, Retail Sales, Industrial Production, Capacity Utilization, Business Inventories, and Michigan Confidence.  In other words, look out for landmines.

Speaking of confidence, the Michigan Confidence index is at lower levels now than it was when Carter gave his ‘malaise’ speech and for that matter, at any time since the survey started in the late 1970s.  As we all remember, in the preliminary release of that report last month, inflation expectations ticked higher leading to a more aggressive rate hike from the Federal Reserve.  Ultimately, that uptick in inflation expectations was revised away, so that will be the key aspect to watch of that report today.

Today’s Morning Lineup discusses policy moves out of DC ahead of the midterms, earnings, news, action in Asian and European markets, and economic data from China.

Carter’s ‘Crisis of Confidence’ speech focused a lot on high energy prices and his proposals to help reduce the US dependence on foreign oil.  Ironically, today President Biden is in the Middle East asking Saudi Arabia to pump out more oil into the global market.  Thankfully for Americans, we’ve already started to see relief as oil prices are well off their highs from earlier in the year and below $100 per barrel.  That has negatively impacted the Energy sector where prices have cratered in recent weeks.  Just yesterday, the sector fell another 1.9% taking its peak to trough decline (on a closing basis) down to 26.3% which is actually five percentage points more than the S&P 500 is down from its peak!

In the process of yesterday’s decline, the Energy sector also closed below its 200-DMA for the first time in over 200 trading days (September 2021).  While it has been nearly ten months since the Energy sector last traded below its 200-DMA, the streak that just ended wasn’t particularly extreme relative to history.  As recently as early 2017, there was a slightly longer streak, and back in August of last year, there was a streak that lasted 185 trading days.  The most extreme streaks for the sector occurred back in the late 1990s and early 2000s when there were two separate periods that stretched roughly three years each! 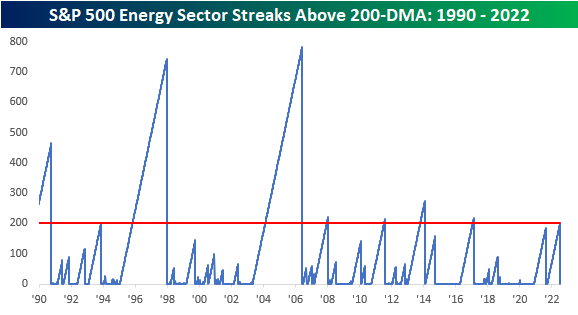 Following its 25% haircut, the Energy sector may have broken support at its 200-DMA yesterday, but it is also right around two other potentially important levels. As shown in the chart below, yesterday’s close coincided with the high from 2019 and is now only modestly above its uptrend line from late 2020 which began when the sector made a higher low following the COVID crash. 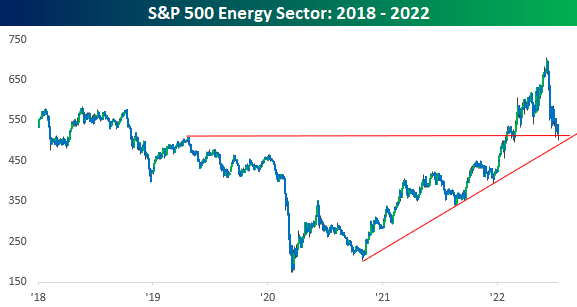