“Giving debt relief to people that really need it, that’s what foreclosure is.” – J.P. Morgan

Futures were lower heading into the open in Asia and have continued lower ever since.  They’re currently near their lows of the morning as the 10-year yield reverses its increase from earlier in the week and oil prices trade lower.  In economic data, we just got a ton of economic data.  Jobless Claims were mixed with initial claims coming in slightly higher while continuing claims were lower than expected.  Import Prices rose slightly less than expected while in the Manufacturing sector, the Philly Fed report missed expectations while the Empire Manufacturing report blew the doors off expectations.  With the headline number coming in at 43.0, Empire topped expectations by a full 25 points.  Going back to 2002, this month’s report was the second strongest relative to expectations on record.  The only one stronger was last June.  Futures popped a bit on this news with the Nasdaq moving positive while the S&P 500 and Dow remain in the red.

Read today’s Morning Lineup for a recap of all the major market news and events from around the world, economic data out of China, the latest US and international COVID trends including our vaccination trackers, and much more.

Despite what have been some generally positive earnings reports, we’ve seen a number of disappointing reactions to earnings from the banks.  Two examples are Bank of America (BAC) and Citigroup (C).  Given their recent history, the fact that both stocks declined in reaction to earnings shouldn’t come as too much of a surprise.  As shown in the tables below, C has now traded lower on the day of its earnings report for six straight quarters while BAC has dropped for seven straight.  In the case of C, this is the longest streak of negative reactions to earnings since 2005 while for BAC, it’s the longest since at least 2001 and perhaps ever. 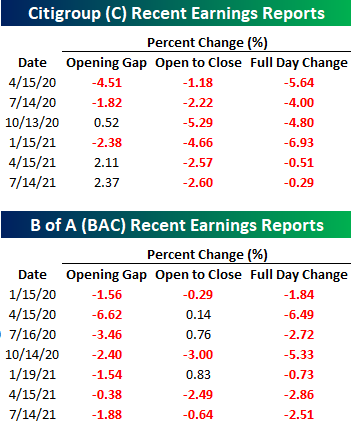