“I am struck that so many of our leaders in the U.S. forget how strong our country can be.” – Jamie Dimon

The market has taken on a bit of a streaky vibe in the last few weeks.  After four straight down days to close out June where the S&P 500 fell 3.2%, the month of July started out with a four-day win streak where the S&P 500 rallied 3.1%.  Since those four days ending last Thursday, the S&P 500 has been down four straight days falling 2.6%.  The current four-day losing streak looks like it’s going to extend to five days as futures are indicated another 1.35% lower.

Besides the litany of issues facing the market all year, the catalyst for this morning’s weakness is weak results from Conagra (CAG), JP Morgan (JPM), and Morgan Stanley (MS).  CAG is down 2.5% after reporting weaker than expected EPS and lowered guidance, MS is only down fractionally, and JPM is poised to open more than 3% lower putting it on pace to fall in reaction to earnings for the eighth straight quarter.

The commentary from the earnings release for JPM wasn’t particularly uplifting:

“The U.S. economy continues to grow and both the job market and consumer spending, and their ability to spend, remain healthy. But geopolitical tension, high inflation, waning consumer confidence, the uncertainty about how high rates have to go and the never-before-seen quantitative tightening and their effects on global liquidity, combined with the war in Ukraine and its harmful effect on global energy and food prices are very likely to have negative consequences on the global economy sometime down the road. We are prepared for whatever happens and will continue to serve clients even in the toughest of times.”

In economic news, PPI came in higher than expected on both a headline and core basis, while initial jobless claims ticked up to 244K which was the highest level since last November.  The rise in jobless claims hasn’t been particularly steep, but it has been consistent ever since, bottoming out in Mid-March.

Today’s Morning Lineup discusses earnings from JPMorgan (JPM) and Morgan Stanley (MS), moves in Asian and European markets, and economic data from around the world.

It’s not just stock prices that have been on the decline this week.  Crude oil prices have fallen sharply and WTI briefly traded below its 200-DMA this morning as it trades down near $93.  As shown in the chart, while prices did run up in anticipation of the event, all of the increases in crude oil prices since Russia invaded Ukraine have now been erased. 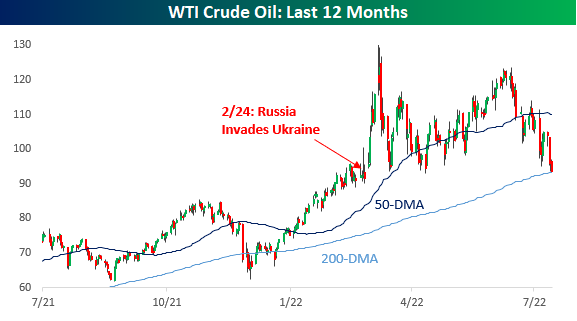 The fact that oil prices are back to levels they were trading at right before Russia invaded Ukraine has been taken as a win by investors, and we wish we could say the same thing about the S&P 500.  Unlike crude oil, which has managed to return back to pre-invasion levels, stock prices have kept falling. 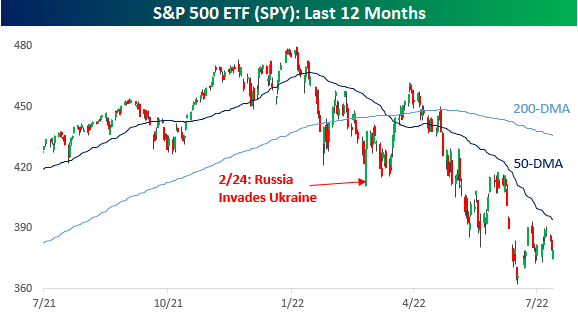