“I continue to believe that the American people have a love-hate relationship with inflation. They hate inflation but love everything that causes it.” – William E. Simon

After yesterday’s doozy of a report on consumer price inflation, today the market is bracing for the latest read on prices in the producer sector.  In addition to that, Treasury Secretary Jerome Powell will be addressing Congress later this morning.

Futures are higher heading into the report as Apple (AAPL) is leading the gains after it reportedly instructed suppliers to increase production by 20% this year.  On the earnings front, the focus remains on financials where the market reaction to the reports has been mixed.

After a brief decline immediately after the release of Tuesday’s June CPI, equity futures shook off the initial weakness and rallied solidly into the green.  It wasn’t until the results of a 30-year bond auction at 1 PM that the equity market gave up the gains finishing in the red.  The fact that equities and long-term treasuries were able to rally in the aftermath of the much stronger than expected CPI report and before the results of the auction was impressive, though.  After all, at 5.4%, headline CPI rose at the fastest rate since July 2008 (5.6%) and before that 1991.

What’s also notable about the recent inflation pattern is that the y/y pace hasn’t declined in eight months now (longest streak since 2011), so the uptick in CPI has been persistent as the base effects from last year’s decline in CPI were in favor of larger increases.  Looking back at 2020, the low point in CPI was May, and in June 2020 CPI rose by 0.5%, so while CPI was still well off its pre-COVID peak last June, this month’s report was the first y/y reading that wasn’t looking back at a period of declining CPI.  To sum up, before this month’s report, all of the y/y readings were against relatively easy comps, but for June and going forward, the y/y readings will be looking back at periods where inflation was already back on the rise, so a continuation of these historically high readings against ‘tougher comps’ would likely quickly raise investor concerns. 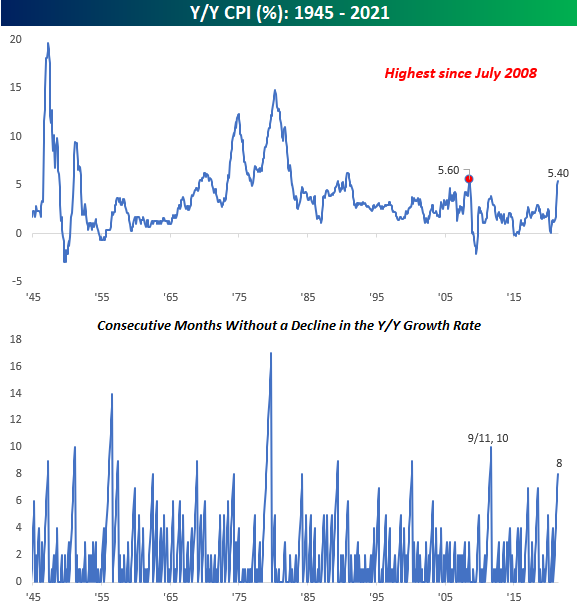