“Inflation is like toothpaste. Once it’s out, you can hardly get it back in again.” – Karl Otto Pöhl

The big CPI report that everyone is waiting for is finally here, and most investors appear to be leaning on the side of a stronger-than-expected report.  However, after two weak days for equities futures are indicated higher in early trading.

Earlier this morning, the IMF cut its forecast for US GDP growth down to 2.3% from 2.9%.  This news is notable for two reasons.  First, it comes less than a month after the IMF downgraded its growth forecast down to 2.9% in late June.  Second, given the indication from the Atlanta Fed’s GDPNow model, which is calling for a Q2 contraction of 1.2% following Q1’s decline of 1.6%, the US economy would need to grow by 3.2% in the second half in order to reach that goal.  Based on the trend in recent data and the Fed’s tightening bias, that level of growth seems optimistic.

In today’s Morning Lineup, we discuss moves in Asian and European markets, Chinese trade data, and economic data from around the world.

The days of the monthly employment report being ‘the most important indicator’ are long gone, and the new flavor of the month is CPI.  Unfortunately for bulls, the trend of recent reports hasn’t been particularly market-friendly.  As we have highlighted repeatedly in recent months, the headline CPI report has rarely come in weaker than expected.  In the two years through May’s report, there have only been two weaker-than-expected headline CPI reports, which is easily the lowest number over a two-year span in at least twenty years.

When times are tough, there’s a stage in the process where people think that if they only wish hard enough, things will go their way.  Unfortunately, elevated levels of inflation are a reality economists can’t simply hope away by consistently low-balling estimates. 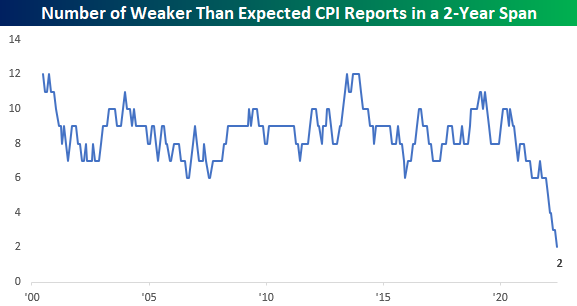